Music from the Dark Side for the Revenge of the Sixth Beware the Revenge of the Sixth, the Dark Side of Star Wars Day.  As I have for the past two years, I'm marking the occasion with music.  I had been "thinking of using music from KOTOR II to observe today--that, or post music cues for Revan as a Sith Lord," but with the release of "Star Wars: The Force Awakens," I have more timely and appealing choices.  One of them that ties together the most recent installment in the franchise with the film that inspired today is Snoke's Theme, which is very similar to Palpatine's Teachings from "The Revenge of the Sith."  Without any further ado, I present Star Wars: Opera House/Darth Plagueis - Snoke Theme.

With The Release Of Star Wars Episode VII The Force Awakens And The Increasing Possibility Of It's Newest Villain, Supreme Commander Snoke Actually Being Episode III's Darth Plagueis The Wise, I Thought I'd Combine Snoke's Theme With The Opera Scene Plagueis Coversation From Revenge Of The Sith.

Of course, Plagueius is dead in Star Wars canon, but when has that ever stood in the way of a good villain?

Follow over the jump for another blast from the past revisited.

The original music from the Dark Side post on this blog was Darth Vader on Dubstep.  I found a fresh take on that theme, pun intended, with Celldweller - The Imperial March.

Celebrating May the Fourth, Celldweller and Star Wars finally collide with Klayton’s take on the famed “Imperial March.” Through all unique instrumentation and vocal work, (no samples used!) Celldweller dives deep into the dark side with his aggressive and explosive take on this famous film movement.

Of course, Darth Vader is not consistently a fan of dubstep. 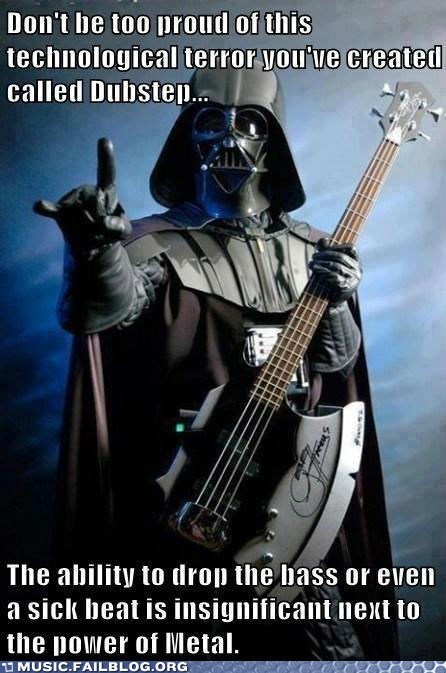 Beware the Dark Side!