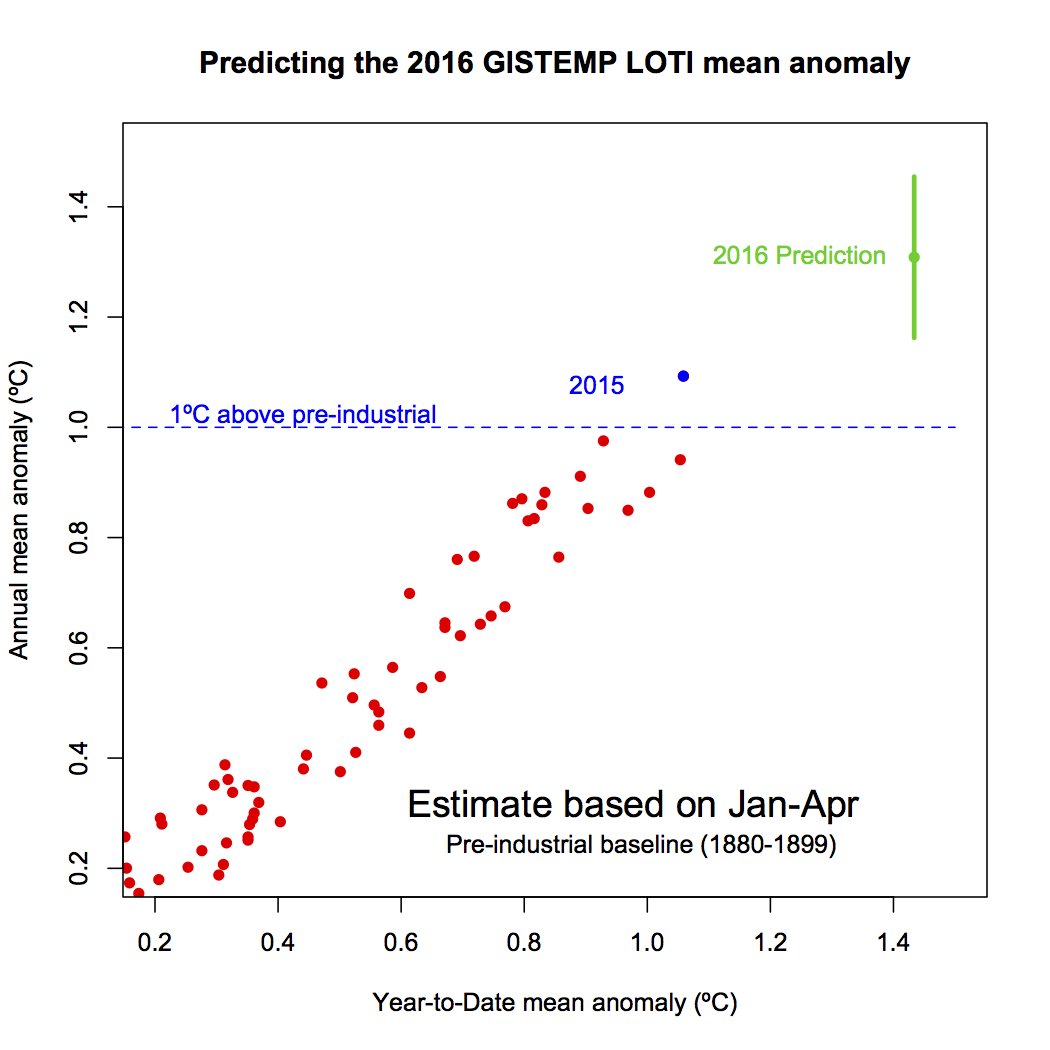 When I last posted about climate, I had good news in the form of the Paris Agreement on Climate being signed on Earth Day.  Today, I have not so good news to report from Newsy: NASA Data Shows Last Month Was The Hottest April On Record.

New data from NASA shows last month was the hottest April ever recorded.

At 0.24 degrees Celsius hotter than the previous April record in 2010, it may not sound like that much. But many are arguing that's shattering records for climate statistics.

One expert told The Independent that soon-to-be-released data could show the last 12 months in a row have all beaten their respective records for hottest months.

And The Guardian noted if all variables stay consistent, a hottest year on record should only happen once every 150 years. Yet in the last 20 years or so, we've seen five record-breaking years.

Higher temperatures could lead to worse air and water quality, higher rates of asthma and the spread of illnesses passed by insects.

A lot of this extra heat is trapped in the oceans as well. Warmer water is posing both area-specific problems, like the massive bleaching of Australia's Great Barrier Reef, and global problems, like rising sea levels.

ABC 7 in Denver put this record in context


.In April, the planet averaged 1.1 degrees Celsius warmer than the 20th century average.

That 1.1 degree difference marks the biggest departure in temperature for April, and fourth biggest departure when compared to the 1,636 months on record! The very recent months of March 2016, February 2016 and December 2015 are the only months to surpass that difference.

CNN shared the implications for the Paris Climate Agreement.


The data that just keeps getting worse has prompted scientists to declare a "climate emergency" and is already casting doubts on pledges made in the Paris agreement to keep temperature rises well below the 2 degrees Celsius that scientists say will have catastrophic consequences on the planet.

The agreement was hammered out in December but signed in record-breaking April, with the ambitious aim to cap temperature rises at 1.5 degrees Celsius compared with pre-industrial levels.

I think 1.5 degrees Celsius above the pre-industrial average is already baked in and keeping the rise below 2 degrees will be a struggle.  That doesn't mean it isn't worth trying to make it happen, just that it will be difficult at best.  Wish us all luck; we'll need it.
Posted by Pinku-Sensei at 12:00 AM