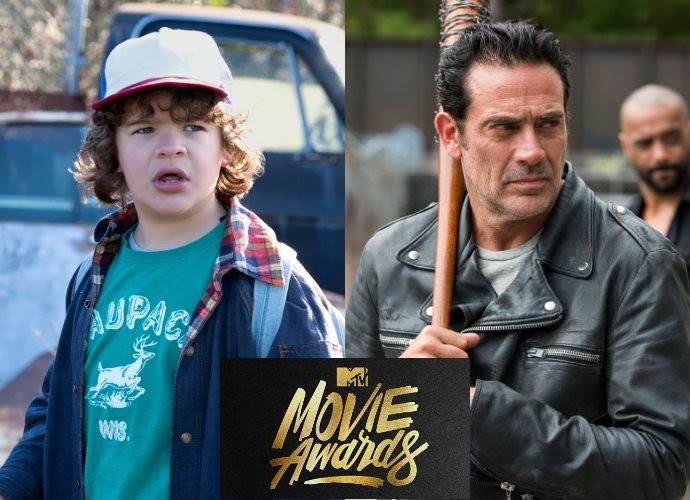 While I was examining the 2017 Saturn Awards, another awards show took place, the 2017 MTV Movie & TV Awards.  Two of the shows that I have been blogging about, "Stranger Things" and "The Walking Dead," won awards.


I think that was well deserved, at least among the nominated field, which included Emilia Clarke ("Game of Thrones"), Donald Glover ("Atlanta"), Jeffrey Dean Morgan  ("The Walking Dead"), Mandy Moore ("This Is Us"), and Gina Rodriguez ("Jane The Virgin").  Brown is also among the nominees for Best Younger Actor on a Television Series at the Saturn Awards.  She has my vote.  As I wrote, "Her performance wasn't just outstanding, it was compelling."

That's not all.  'Stranger Things' won Show of the Year.

'13 Reasons Why' Cast Presents The Cast Of 'Stranger Things' With Show Of The Year Award.

In addition to Brown being up for a Best Younger Actor on TV and Winona Ryder nominated for Best Actress on a Television Series, "Stranger Things" itself is up for a Saturn Award.

It has my vote.  I've been saying this could be the year for "Stranger Things" and the Saturn Awards will be my chance to make that happen.

Finally, Jeffrey Dean Morgan won for Best Villain against Wes Bentley ("American Horror Story: Roanoke"), Demogorgon ("Stranger Things"), Jared Leto  ("Suicide Squad"), and Allison Williams ("Get Out").  Negan beat The Joker, and not with a baseball bat!*  Morgan is also up for a Saturn Award for Best Guest Performance on a Television Series and has my vote on a technicality (I don't consider Anthony Hopkins' role in "Westworld" to be a guest performance).

I'll have more on the movie winners in a future post.  In the meantime, here's a reminder about voting for the Saturn Awards.

Speaking of "this electorate," my readers and I have a chance to change its composition.  Click here to apply for an affiliate membership.  At $25, one can vote for the best films and television shows.  At $40, one can vote for all categories.  I'm paying $40.  I hope my readers do, too.

I've already paid my $40 and will vote as soon as I post my last entry about the nominees.  Stay tuned.

*That may not be saying much.  As I wrote in 'Suicide Squad' vs. 'Deadpool' at the Razzies and Oscars, "Jared Leto...is probably the worst movie Joker ever, although Jack Nicholson and Heath Ledger set very high bars for the role."  Joker should at least be funny when it's called for.  Leto's Joker was just creepy.
Posted by Pinku-Sensei at 10:13 AM