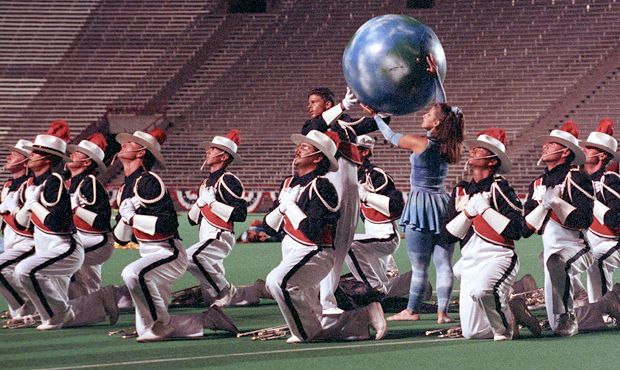 When I wrote "I doubt I'll have much time for DOOM this week," I didn't realize how little there would be.  I was planning on posting something about the People's Climate March today, but I'm on break this week, so I'm just not feeling it.  Instead, I'm going to give Earth Day the same treatment I've given other holidays, celebrate it with a drink from Tipsy Bartender and music from drum corps.  It's past time I did, especially since Earth Day itself was more than a week ago.  Sometimes inspiration strikes late.

PREPARATION
1. To an ice filled glass add coconut vodka, blue curacao, lemon juice and lemon lime soda. Stir well to mix. Set aside.
2. Using scissors or a small knife roughly cut the shapes of the continents out of lime peel. Place shapes inside a round glass and pack with crushed ice.
3. Pour mix into glass and serve. Enjoy responsibly!

Now that my readers have a drink, they can sip it while watching two clips of Crossmen's 1992 show, "Songs for the Planet Earth."  First, the official video from Drum Corps International: DVD Spotlight: 1992 Crossmen.

Crossmen's 6th place presentation of "Songs for the Planet Earth" visited our home planet as part one of a three-year song cycle; followed the next two years with "A Celebration of Humanity" and "Suite Children." The show was created with a sense of concern for environmental preservation.

I conclude with the final minute of the show.


I hope my readers found that as inspiring as I did.

I might have something serious tomorrow.  After that, Thursday is Star Wars Day, Friday is Cinco De Mayo, Saturday is Revenge of the Sixth, and Sunday will be an entertainment feature.   As I wrote, there will be very little time for DOOM this week and I'm O.K. with that.
Posted by Pinku-Sensei at 12:40 PM