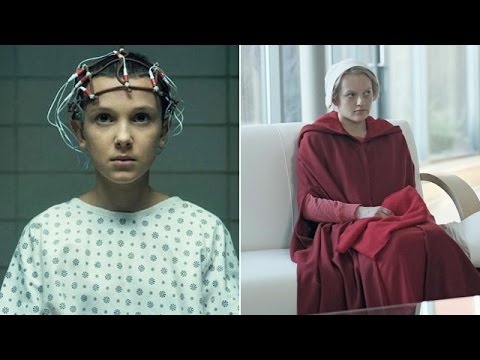 I concluded yesterday's entry by telling my readers to "stay tuned for the Sunday Entertainment Feature.  I plan on writing about the Television Critics Association Awards."  I begin with Wotchit Entertainment's Atlanta, Handmaid’s Tale Lead TCA Award Noms.

The 2017 Television Critics Association award nominees have now been officially announced. FX's "Atlanta," NBC's "This is Us" and "The Handmaid’s Tale" had the most nominations with four. Those three shows are also up for the Program of the Year award. Five other programs had three a piece. HBO earned the most nominations for a single network with 12, followed by FX with 11, Netflix with ten, NBC with seven and Hulu with four.

In addition to "The Handmaid's Tale," "Atlanta," and "This is Us," three other shows are nominated for Program of the Year.  Two of them, "Stranger Things" and "The Leftovers," count as speculative fiction.  The third, "Big Little Lies," tied for the most honored television show at the Golden Trailer Awards, which prompted me to observe "I'll know to look for "Big Little Lies" among the Emmy nominees next month."  Its three TCA Award nominations just reinforce that feeling.  Just the same, I'm rooting for either "Stranger Things" or "The Handmaid's Tale."

Both "Stranger Things" and "The Handmaid's Tale" are also nominated for Outstanding Achievement in Drama and Outstanding New Program.  In the first category, they're competing against the past two years' winner, "The Americans," as well as "Better Call Saul," "The Crown," and "This is Us."  I'm rooting for "Stranger Things," but I expect either "The Americans" or "The Crown" will win.  In the second, both are competing against "The Good Place," which I first realized was speculative fiction when I saw it among the nominees for Best Fantasy Television Series at the Saturn Awards.  I'll have more to say about the show about the afterlife later.  The other nominees for Outstanding New Program include "Atlanta," "The Crown," and "This is Us."  I'd love for one of the three speculative fiction nominees to win, especially "Stranger Things," but I suspect one of the more conventional shows will instead.

Elisabeth Moss earned the fourth nomination for "The Handmaid's Tale" in Individual Achievement in Drama, the TCA's equivalent to Best Actor/Best Actress.  This is the same category in which Carrie Coon earned a second nomination for "The Leftovers" and "Fargo" combined.  Between the two of them, I am rooting for Coon, but I doubt either will win in a field that includes Sterling K. Brown for “This Is Us,” Claire Foy for “The Crown,” Nicole Kidman for “Big Little Lies,” and Jessica Lange and Susan Sarandon “Feud: Bette And Joan.”  Note the predominance of actresses in this field.  This reflects what I have been saying since December and repeated most recently last month, that the actresses this year are very strong, stronger than the actors.  I'm glad to see the TCA concurs.

The nominees for Individual Achievement in Comedy also show that the actresses are stronger than the actors this year.  The one speculative fiction nominee is Kristen Bell for “The Good Place.”  She's competing against four other actresses, Pamela Adlon for “Better Things,” Julia Louis-Dreyfus for “Veep,” Issa Rae for “Insecure,” and Phoebe Waller-Bridge for “Fleabag,” and two actors, Aziz Ansari for "Master of None" and Danny Glover for "Atlanta."  I'm rooting for Julia Louis-Dreyfus, but I wouldn't be upset if Bell won.  However, I expect Glover might instead.

Speaking of comedy, "The Good Place" is competing for Outstanding Achievement in Comedy along with "Atlanta," "black-ish" (last year's winner), "Fleabag," "Master of None," and "Veep."  I'm rooting for "Veep," just like I'm rooting for Louis-Dreyfus, but expect "black-ish" to win instead.

There is one last category with speculative fiction shows.

That's enough fantasy.  I might write about the reality and news and information program nominees later.  Stay tuned.
Posted by Pinku-Sensei at 12:00 AM