It's a Flashback Friday, which reminds me that I left off the series of retrospectives of the previous year's blogging with Flint Water Crisis for the sixth year of Crazy Eddie's Motie News where I made the following program note.

That concludes the retrospectives of the forty most read entries posted during the past blogging year.  The next one planned should be about the entries with the most comments and likes and shares on social media.  Stay tuned.

That was two months ago.  It's long past time I resumed, especially since this is the next to last entry I have planned for the series.

The other entry that tied for most commented on during the past month was Hundreds protest Trump in Willow Run for the Ides of March from March 16, 2017.  Here's what I wrote about it in The resistance for the sixth year of Crazy Eddie's Motie News.

I like being an environmentalist by recycling and reusing.  It reduces my energy expenditure, so I don't refuse to blog.

The entry that earned the most pluses on Google+ last year was Katy Perry roars for Hillary Clinton from November 8, 2016, which I already partially reviewed in Entertainment and the election for the sixth year of Crazy Eddie's Motie News.

I have two things to add.  First, it earned the most pluses of any entry on Google+ during November.  This is obvious, but necessary for completeness.  Second, it earned its pluses by people making negative comments, so it wasn't really liked.  Still, it did get the most attention, so it landed on top, liked or not.

As for an entry that actually was genuinely appreciated on Google+, I submit Michigan Green candidates from the bottom of the ballot to the top from August 13, 2016.  It earned ten pluses from uniformly positive comments at the Green Party communities on Google+.  In retrospect, I should have included it in Minor parties for the sixth year of Crazy Eddie's Motie News.  Here's what I wrote about the entry in Best August so far and other monthly meta.*

The most liked on Google+ during August was "Michigan Green candidates from the bottom of the ballot to the top" from August 13, 2016 with 11 pluses earned from being shared on the Green Party communities on Google+.  It ended the month with 194 page views, 222 page views, 44 of them within one day of the Green Party of Michigan sharing it on their Facebook page.  I also shared at Kunstler's blog.  While I officially have it as the second most read entry from August and 5th overall, it jumped up to 3rd overall on the last day of the month.

On the one hand, the entry continued to gain readers, ending the year with 362 raw page views.  On the other, it lost a plus, taking it out of a tie with Katy Perry roars for Hillary Clinton.  I'm used to the default page views declining over time, but not the pluses on Google+.  Maybe someone deleted the comment or share or was banned from the community.  Whatever.

I mentioned that I linked to the entry in a comment to Burning Down the House at Kunstler's blog, so this is what I wrote about it.

"As the certified lesser of two evils"  K-Dog, you missed two obvious slogans that riff on this very theme.  Let me help you.  First, Jill Stein's slogan is "Time To Reject The 'Lesser Evil' & Stand Up For The Greater Good."  I did my part to help her message along when I reported on Michigan Green candidates from the bottom of the ballot to the top.  As for Cthulhu, his campaign slogan has always been "Why settle for the LESSER Evil?" 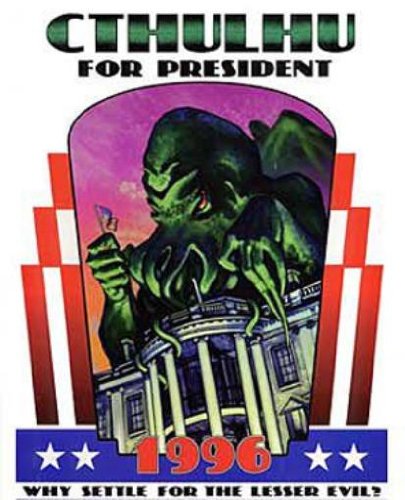 Speaking of prehistoric sea monsters, the most saved entry on Pinterest last year was Infidel 753 and I talk fossils from September 7, 2016.  It ended the blogging year with the pin saved 82 times.  It was also the most saved pin during four different months, November 2016, December 2016, February 2017, and March 2017.  The post has two other distinctions.  It was the second most commented on entry posted during the most recently completed blogging year with 12 comments and was in first place until the last week of the reporting period.  It was also the sixth most read entry of September 2016 and the fifth most read actually posted during the month with 227 default and 375 raw page views.  It ended the year with 484 raw page views.

Three other entries deserve mention for their activity on Pinterest.  The first is Star Wars Drinks for Star Wars Day from May 4, 2015, which was the most saved pin in June, July, August, and October.  It had been saved 51 times since I gave it a new preview image last year, making it the back catalog champion on Pinterest for the year.  The other post from the back catalog to earn a spot was Drink recipes for July 4th from Tipsy Bartender, which was the most pinned during April and May 2016.  Pinners like drinks!

The last post with a lot of pins was For Winter Solstice 2016, the Archdruid and I discuss Discordianism and fake holidays from December 21, 2016.  I'll be a good environmentalist and recycle what I wrote about the entry in Holidays for the sixth year of Crazy Eddie's Motie News.

It was actually the second most saved pin from an entry posted during the past year, not the second most pinned overall, but that's why I revisited the post today, so I can correct the record.

I conclude with the most retweeted post on Twitter during the last year, Evan Rachel Woods on acting in Westworld from November 1, 2016.  I figured out that's what it was when I wrote Entertainment for the sixth year of Crazy Eddie's Motie News.

I have one more retrospective planned in this series, top posts from the back catalog.  Stay tuned.

*That was the last monthly retrospective I've posted.  I plan on resuming them in either July or October, when I will need them to boost page views.

Previous retrospectives about comments and likes. Previous entries in this series.