I mentioned my wife's car in Driving update for June 2017: Pearl plus Tesla worth more than GM or Ford.


I was hoping for fewer miles because of a week off and not having [to] make up for Dez not being in the shop, but apparently I managed to drive slightly more just the same.  However, I'll have to wait until Dez passes 55,000 miles to see what the total driving impact for the family really is.  That should happen late this month or very early next month.

Dez passed 55,000 miles on Wednesday the 21st, so it's time for another driving update.

It took my wife 85 days to drive Dez 1000 miles, which translates to 11.76 miles per day and 358.82 miles per standard month.  That's more than the average of 7.19 miles per day or 219.42 miles per standard month she drove Dez between November 2016 and March 2017.  The reason for the increased driving is the same one that I cited in March for Pearl not getting a third update since November before Dez got her first; my wife drove the car to Chicago and back to visit our daughter.  More of that trip accrued to this update than the last one.

Speaking of baseline, it's time for a comparison of our driving habits to those of the rest of the country.  From Doug Short.


The Department of Transportation's Federal Highway Commission has released the latest report on Traffic Volume Trends, data through April.

Here is a chart that illustrates this data series from its inception in 1971. It illustrates the "Moving 12-Month Total on ALL Roads," as the DOT terms it...The latest data point is another all-time high. 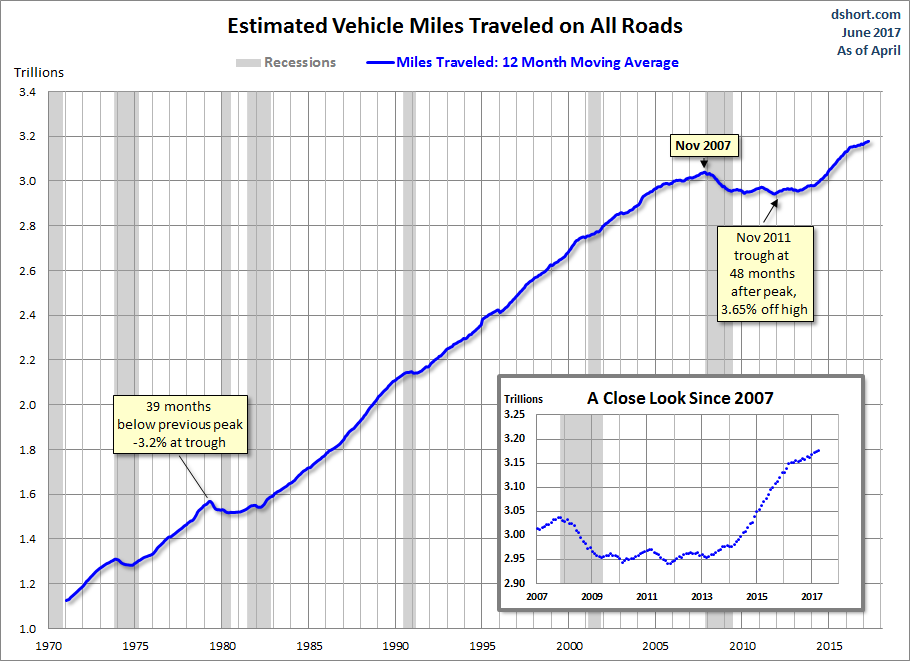 Looks like my wife and I are contributing to the trend of increased driving.  That might increase more, as oil and gas prices are down year over year, but that's a story for another entry.  In the meantime, stay tuned for the Sunday Entertainment Feature.  I plan on writing about the Television Critics Association Awards.
Posted by Pinku-Sensei at 12:00 AM