The Weather Channel tells off Trump for leaving climate agreement 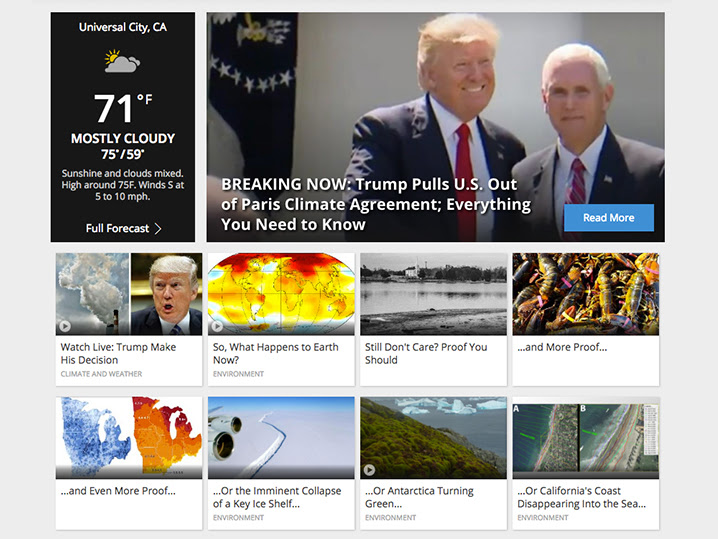 I had other plans for today, but Trump announcing that the U.S. was leaving the Paris Climate Accord took precedence.*

The news caused all kinds of reaction, some of which I'll post tomorrow, but the one I found most worthy of immediate attention came from The Weather Channel.  TMZ summarized it in one paragraph and posted the screen capture image above.

The Weather Channel devoted nearly all of its website's home page Thursday to a not-so-subtle shot. This is what it looked like moments after the Prez ended his announcement at the White House -- and ALL its top stories are dedicated to making Trump's decision look like total foolery.

It didn't even wait until Trump announced.  It prepared a video on the rumors and posted it as U.S. Quits Paris Agreement: What Happens Now?

The results could be disastrous.

After Trump spoke, it followed up with To President Trump: Regardless of Politics, Science Screams The Truth.

As TMZ wrote, "There's nothing lukewarm about this reaction."

*I'll post about "Wonder Woman" on Monday instead.  I predict the movie will gross at least $90 million dollars over the weekend.  Check back then to see if that prediction comes true.   As for National Donut Day, the climate is more important.
Posted by Pinku-Sensei at 12:00 AM