When I wrote Driving update for January 2017: Pearl, I forecast that "I could post two more updates for Pearl before I write one for Dez."  I repeated that in Driving update for February 2017: Pearl, when I wrote "I'm still on track to post another update on Pearl before I write one for Dez."  That ended up not happening, as Dez rolled over 54,000 miles on Tuesday, March 28, while Pearl is still 350 miles away from her next update.*  I'll explain why after the numbers.

Dez passed her previous milestone of 53,000 miles on November 9, 2016, which I reported in Double driving update for November 2016.  That was 139 days before passing 54,000 miles for an average of 7.19 miles per day or 219.42 miles per standard month.  That's a lot less than the 22.73 miles/day and 693.18 miles/standard month my wife drove Dez at the time of the previous update and why I thought I could get another update in for Pearl.  All those errands I've been running saved her a lot of driving.

That written, the important statistic is how much my wife and I have been driving our two cars combined.  During the same 139 days it took my wife to drive Dez 1,000 miles, I drove Pearl 2,650 miles for a combined 3,650 miles.  That translates to 26.26 miles per day and 800.90 miles per month.  That is indeed a lot less than the combined average of 47.12 miles/day and 1437.08 miles/standard month between September and November.  Yes, those errands have indeed paid off in less driving for both of us.

Just the same, why did I end up being wrong about Pearl getting another update before Dez?  That's because my wife drove to visit our daughter in Chicago again, hence the image of a car like Dez with the Chicago skyline behind it I used to illustrate the entry.  Family, like sustainability, is a priority.

We aren't alone in decreasing the amount we are adding to the nation's driving.  The following graph from Doug Short shows the rise in total miles driven is starting to flatten out with a gentler slope during 2016. 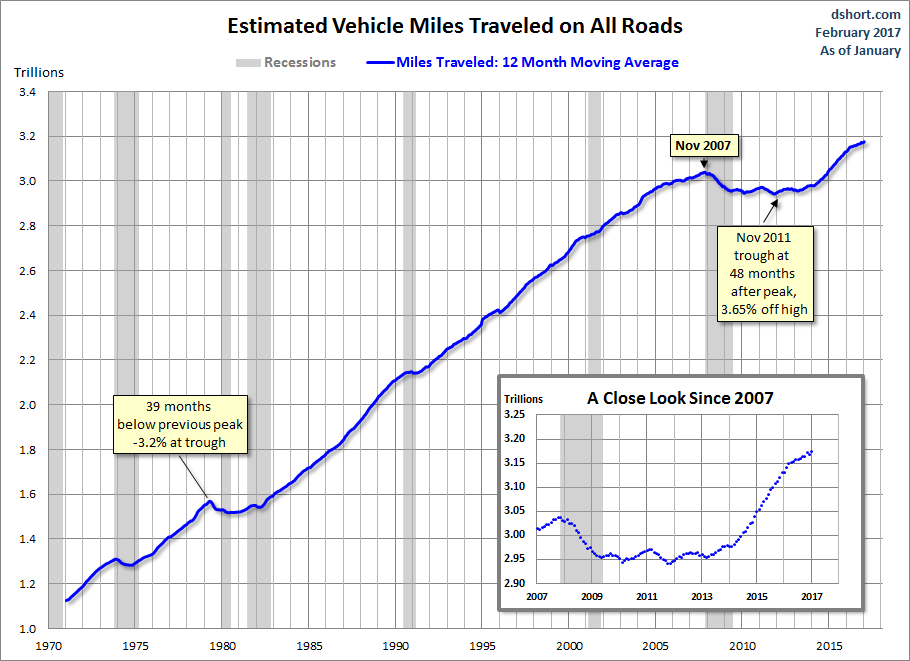 I was wondering how long that meteoritic rise out of the depressed driving from the Great Recession would last.  Now I know it began to abate a year ago.

Stay tuned for the last entry of the month.