Payless Shoes, a tale of the Retail Apocalypse

I told my readers to "Stay tuned for the installment about Payless Shoes that I promised in Radio Shack, a tale of the retail apocalypse from Company Man and Retail Archeology" at the end of A belated World Population Day 2018.  That's not the first time I mentioned the chain; that was in last month's Business Insider on dead malls in the Retail Apocalypse with assistance from Dan Bell and Radiohead.  It's time to deliver another episode in my ongoing series, tales of the Retail Apocalypse.

I begin the story with Payless Closing Stores from WFLA News Channel 8.


That's a decent overview that places the chain's bankruptcy into perspective, as Payless was the ninth retailer to declare bankruptcy in the first four months of 2017, but it lacks personality and a sense of deeper history.  For that, I turn to Retail Archeology's Payless ShoeSource: Doesn't It Feel Good To Pay Less Anymore?

That 400 store number ended up being conservative.  As the following graphic from Business Insider on stores closing in the Retail Apocalypse shows, Payless ended up closing 800 stores by the end of 2017. 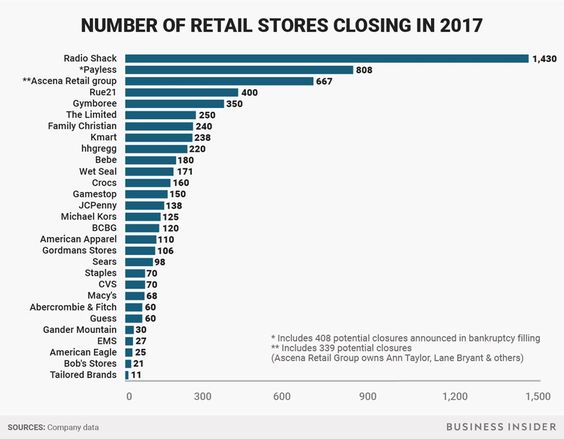 Looking at that graphic, I realize that I have quite a few more chains to write about.

Before I do, I am sharig what passes for a local angle on this story, Payless Shoes Closing it's Doors in Alpena Mall from WBKB-TV.


I wish the mall manager luck in finding a store to replace Payless.  When I checked the mall's website, I found three clothing stores, none of which were the ones he named.  On the other hand, I did see a JCPenney.  I might write about them next week.

In the meantime, stay tuned for a National Daiquiri Day follow up to The history of U.S.-Cuba relations drives one to drink on National Mojito Day 2018
Posted by Pinku-Sensei at 12:15 AM