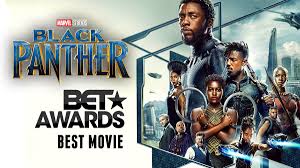 For today's Sunday entertainment feature, I'm following through on my idea to write about the BET Awards that I proposed in Radio Shack, a tale of the retail apocalypse from Company Man and Retail Archeology.  Hey, I can't be all DOOM all the time!

Before I announce the winners of the movie, TV, and humanitarian awards with help from Deadline Hollywood, I'm sharing Jamie Foxx Praises Black Panther & Michael B Jordan from BET Networks.


That set up a great night for "Black Panther."  The only negative thing I will say is about something that hasn't happened yet, but will.  In Drink to 'Avengers: Infinity War' having the best opening weekend box office of 2018 so far, I forecast that it would not hold onto at least two of its box office crowns.

At this rate, both films will reach $700 million at the North American box office with "Infity War" supassing both that level and "Black Panther" by tens of millions of dollars. $750 million is not out of the question.

Still, that hasn't happened yet.  Deadline reported on what did.

“The film is about our experience being African American and also being from Africa,” said director Ryan Coogler in his acceptance speech. “It was about tapping into that voice we always hear that tells us to be proud of who we are.”

Don't just read the words; watch and listen for yourself in #WAKANDAFOREVER - 'Black Panther' Takes the Crown for Best Movie.

Ryan Coogler speaks on the importance of connecting the present with the past as we move toward the future. Powerful words for an iconic film.

In addition to Chadwick Boseman, six other performers from "Black Panther" earned nominations for acting awards for a total of seven nominees from one film.  Angela Bassett, Lupita Nyong’o, and Letitia Wright lost to Tiffany Haddish for Best Actress and Daniel Kaluuya, Michael B. Jordan, and Sterling K. Brown joined Boseman as nominees for Best Actor.

While "A Wrinkle in Time" lost to "Black Panther" for Best Movie, Ava Duvernay managed to win another statuette for Video Director of the Year Award, making her the third speculative fiction winner.  Congratulations!

The Humanitarian Heroes include[:] James Shaw Jr. the man who disarmed Waffle House shooter; Naomi Wadler, the memorable 11-year-old March For Our Lives speaker; Mamoudou Gassama, the man who saved a child from falling from a building; Justin Blackman, the only student to walk out of his high school on National Student Walk-Out Day; Shaun King, journalist who has told untold stories in the Black community; and Parkland survivor Anthony Borges.

I need to write about all these people on days other than Sunday, when this blog is supposed to be about reality instead of fantasy.  At least I've blogged about  March For Our Lives, so that takes care of three of them.

That's it for this week's Sunday entertainment feature.  The next time I write about awards shows should be for the Teen Choice Awards, then the Emmy Awards.  Before then, I have some climate news.  Stay tuned.
Posted by Pinku-Sensei at 1:44 AM