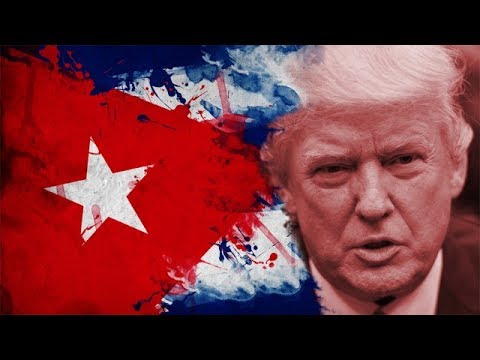 After the Vox video I included in The history of U.S.-Cuba relations drives one to drink on National Mojito Day 2018, I observed that things didn't turn out as well as Vox had hoped.


Vox posted that video in 2016 and relations have chilled since then.  I'll save that for part 2, which I'll post on National Daiquiri Day 2017.

It's National Daiquiri Day, a celebration of another Cuban drink, so it's also time for me to continue with an examination of U.S.-Cuba relations.

Trump mostly reversed Obama's lifting of the trade and travel restrictions between the U.S. and Cuba.  While that was generally popular with Cuban-Americans in Florida, it did hurt some Americans.  KARK reported in June on their Senators' and Representatives' efforts to ease restrictions in Pro-Cuba Trade Lawmakers Hope to Open up Cuban Market to American Farmers.


Arkansas wasn't the only state involved.  The High Plains-Midwest Ag Journal quoted Senators from Kansas and Minnesota who also wanted to ease restrictions for agricultural imports.


“With an open market to Cuba, Kansas could top $55 million in additional sales. While we are renegotiating our trade deals, we have a $2 billion market untouched right under our nose. It is time to throw support behind this mutually beneficial economic opportunity. It is through leadership in Congress, and discussions like this roundtable that we will begin to make these lasting changes,” [Representative from Kansas Roger] Marshall said.
...
“I’m grateful to have participated in this important discussion. The time to begin renewing our relationship with our neighbors just 90 miles off the Florida coast is now. With American farmers suffering some of the lowest commodity prices we have ever seen, Congress has an opportunity to take action and make real change,” [Representative from Minnesota Tom] Emmer said.

“The Cuba Agricultural Exports Act, sponsored by Rep. Crawford, would lift financing restrictions imposed by the embargo on agriculture exports. The result would be relief for our farmers and a first step toward redefining the American-Cuban relationship. While my bill, the Cuba Trade Act, accomplishes the ultimate goal or lifting the embargo completely, passing Rep. Crawford’s bill can, and should, happen immediately.”


The Florida Republican on Wednesday declared on Twitter that he’d block any new amendments to the farm bill unless the Senate votes to strike a provision that would allow USDA funding for foreign market development programs to be spent in Cuba — or until senators adopt his proposal to ban U.S. taxpayer dollars from being spent on businesses owned by the Cuban military.

In the end, the House and Senate passed different versions of the Farm Bill, so it's going to a conference between the two chambers to reach a compromise.*


David Richardson, a state representative who for the last six years has represented Miami Beach and Little Havana, spent roughly 36 hours in Cuba this week, returning to Miami on Tuesday night. He said his visit — focused on meetings with local business owners and members of the country’s gay community — reinforced his opinion that the trade embargo put in place after Fidel Castro’s revolution has been counterproductive.

“We need to lift the embargo,” Richardson told the Miami Herald. “I absolutely believe that the people in Cuba are being harmed right now because of this policy. We need to lift the embargo so that ordinary citizens can be empowered and through their empowerment they will change policy in Cuba. It’s ridiculous or nonsense for us to believe that a continuation of a failed policy that’s 60 years old is going to somehow change the minds of the Cuban regime.”

All of this is enough to drive one to drink.

On that note, follow over the jump for two daiquiri recipes from Tipsy Bartender.

I begin the fun portion of today's entry with Peach Daiquiri.

I conclude it with Snow White Daiquiri.

I might recycle this drink to toast "Once Upon a Time" earning an Emmy nomination.

That's it for National Daiquiri Day.  Tomorrow is National Moon Day.  I'll have something planned for it.  Stay tuned.

*One good thing that may come out of the bill is the legalization of hemp.  If so, I'll write about it.
Posted by Pinku-Sensei at 9:39 AM