I concluded 'Last Week Tonight with John Oliver' on North Korea, a triple Emmy nominee by telling my readers to "stay tuned for the speculative fiction nominees at the Teen Choice Awards."  As I did last year, I begin with the movie nominees.  Here they are from Billboard, along with my comments on them.

Based on the box office, I'd say "Avengers: Infinity War" will be the winner.  It's also the early favorite for the Saturn Award in the Comic-to-Motion-Picture category.  I expect to see both "Tomb Raider" and "Pacific Rim: Uprising" nominated as well.  As for "Justice League," based on what I wrote in 'Black Panther' vs. 'Wonder Woman' at the Saturn Awards for a late Free Comic Book Day, should be happy just to be nominated.

With the youthful electorate, I expect Tom Holland has the inside track.  I'd like to think that his winning Best Young Movie Performer at the Saturn Awards would be an indicator, but I suspect the MTV Movie & TV Awards would be a better indicator.  The fly in the ointment might be all of the Avengers splitting the vote and John Boyega, who was nominated for acting in two different genres, sneaking on by.

The best actresses here are Alicia Vikander and Amy Adams, but I think Gal Gadot is the favorite. ETA: After all, she's the defending winner. Here is Gadot accepting her trophy last year. 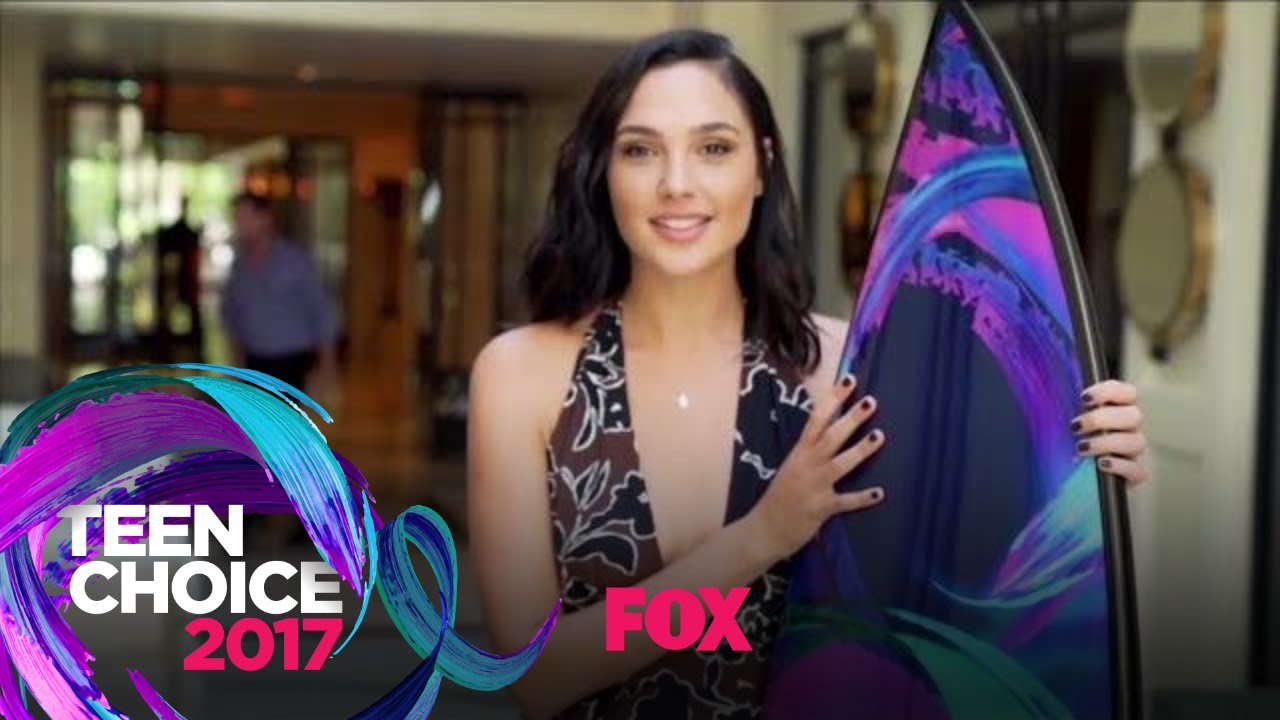 Now I begin to take issue with the categorization of the nominees.  In this case, it's "Thor: Ragnarok" that is in the wrong place; it's either a fantasy movie or an action movie, not a science fiction movie.  Despite the depiction of the Asgardians as aliens, they are still Norse gods.  "Star Wars: The Last Jedi" belongs here instead.  On the other hand, I have no issue with "Black Panther" as a science fiction movie and I think it will win.  As for "Rampage" and "Ready Player One," I'm looking forward to both being nominees at the Saturn Awards next year.

Remember what I wrote above about the MTV Movie & TV Awards being a good indicator?  Based on those, I expect Chadwick Boseman to win this category.  On the other hand, I'm not sure that Dwayne Johnson will be nominated for this role at the Saturn Awards.  Another role, maybe.

An older electorate voted for Danai Gurira at the Saturn Awards, but I suspect either the young crowd voting here will pick Letitia Wright or the "Black Panther" fans will split their vote and either Tessa Thompson or Olivia Cooke will sneak on by.  Speaking of which, Cooke might get a nomination at the Saturn Awards, although I don't know what the cutoff for Young Performer is.

While I think "Star Wars: The Last Jedi" should switch with "Thor: Ragnarok," that won't stop either it or "Coco" from winning this category.  I won't see "Peter Rabbit" at the Saturn Awards, as it was eligible last year but passed over for "Paddington 2," but I'm sure I'll see "A Wrinkle in Time" nominated.  Also, couldn't a fifth fantasy film have been nominated?  I'd say "It" except that it was rated R (hah, a film the cast couldn't see).

I'd vote for Mark Hamill so that he could repeat his Saturn Award win, but I wouldn't be surprised if one of the voice actors, particularly Anthony Gonzalez or James Corden, wins instead.

If the "A Wrinkle in Time" fans unite for anyone, it will probably be Storm Reid (adults would probably vote for Oprah).  If they split their vote, I think the surfboard will go to Daisy Ridley, who is nominated elsewhere.  I expect I will see three of the above actresses nominated at the Saturn Awards, Reid, Oprah, and Reese Witherspoon.

Speaking of elsewhere, follow over the jump for the nominees in two categories, Drama and Comedy, that I would expect to skip except that both categories have speculative fiction nominees.

Both "A Quiet Place" and "Truth or Dare" are actually horror movies that I expect to see again at the Saturn Awards, but they're here in drama.  Joining them are three films nominated at the Saturn Awards, "Murder on the Orient Express" as a thriller, "The Greatest Showman" as an action film, and "Wonder," which won independent film.  I would like to think one of them will win this category, although "Midnight Sun" could be a sleeper.

I'd vote for either Hugh Jackman or Timothée Chalamet and I think Chalamet would be favored, but I never know with younger voters.  They might go for any of them.

Saoirse Ronan and Julia Roberts are the best actresses here, but that doesn't mean they'll win.  They might just go for Lucy Hale, who has won multiple Teen Choice Awards for "Pretty Little Liars."  I doubt she'll get a nomination for a Saturn Award, but one never knows.  Also, this is Ridley's other nomination.  Frankly, she wasn't even the best actress in "Murder on the Orient Express."  I'd give that to Michelle Pfeiffer.

"Jumanji: Welcome to the Jungle" is the speculative fiction nominee here and I hope it wins.  I think its strongest competition comes from "Pitch Perfect 3," which won at the Makeup and Hair Stylists Guild Awards, or "Love, Simon."

And Dwayne Johnson is the third actor with two nominations.  I don't know if a three-way split among the male leads in "Jumanji: Welcome to the Jungle" helps him.  I would give that contest to Jack Black.  On the other hand, the best comedian here is probably Will Farrell.  I'd vote for him.

On the other hand, Karen Gillan is not hampered by a split vote, while the stars of "Pitch Perfect 3" are.  The best actress of the three is Anna Kendrick, but she's not necessarily the funniest.  That's Rebel Wilson.  Unfortunately, Amy Schumer can be funnier than any of them, so she may not be my vote, but she is my favorite to win.

ETA: After a video I included in 'Riverdale' and 'Stranger Things' lead television nominees at the 2018 Teen Choice Awards, I observed that it "has all the rest of the television nominees, but also the rest of the movie nominees, which I forgot to included in part one.  Oops.  Time for me to add those categories in a rare after-the-fact edit."  Here they are from Wikipedia.

The box office leader is "Incredibles 2" followed by "Jurassic World: Fallen Kingdom," so I think the first would win the movie category while the latter will win the acting categories.  Sorry, "Solo: A Star Wars Story" and "Deadpool 2."

Thanos all the way with Killmonger in second and Pennywise in third.  Darth Tantrum doesn't stand a chance.

Out of this bunch, I'd vote for Sophia Lillis, but that doesn't mean she'll win.  Her main rivals are Nick Robinson and Letitia Wright.

I'd vote for the pair from "Black Panther," even though they are not fated to get together again.  After the Disney-Fox merger, T'Challa will pair up with Storm from X-Men, just like in the comics.  Just watch.

That's it for the pure movie nominees.  I'm delaying the television nominees until Sunday for the regular Sunday entertainment feature.  It's Shark Week, an event I skipped last year, so I'm making up for it by celebrating it tomorrow with a video I showed my class last week.  Finally, Saturday is National Waterpark Day and I have a special video from Defunctland already picked out.  Stay tuned.
Posted by Pinku-Sensei at 12:02 AM