Seth Meyers takes closer looks at the assault on the USPS 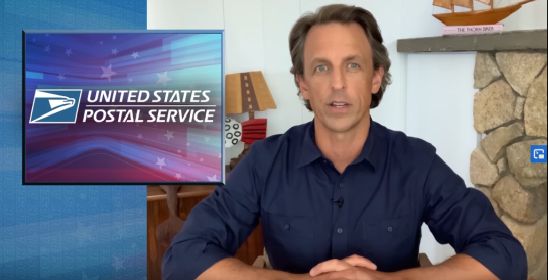 I just wrote WOOD-TV finds dismantled mail sorting machines in Michigan and Governor Whitmer and Senator Peters react on MSNBC yesterday, but I couldn't resist another examination of the Post Office. Since I traditionally alternate between serious and silly treatments of an issue, it's time for some comedy. I just happen to have two clips from Late Night with Seth Meyers on the subject. I begin with USPS Trump’s Plan to Sabotage the Post Office Before the Election: A Closer Look from August 11, 2020.

Seth takes a closer look at the president trying to undermine the integrity of the election by sabotaging the post office because he knows he can’t win in November with a majority of votes.

Hey, look, a clip from Business Insider on the rise and fall of the USPS that explains what happened to the Post Office plus a photo showing Senator Susan Collins at the signing of the bill that is causing the Post Office's financial troubles. That alone is a reason to vote her out.

The Business Insider video makes another appearance in Trump and the GOP Are Trying to Destroy the Post Office: A Closer Look from earlier this week, along with the latest news about mail sorting machines being taken out of service.

Seth takes a closer look at President Trump and the Republican Party’s plan to dismantle the US Postal Service that is both an assault on democracy and the culmination of a decades-long movement to privatize one of the country’s most cherished public institutions.

As Seth points out, the assault on the Post Office has been building for decades. In Trump, the plan finally found someone who is willing to carry it out.

As an aside, I'm glad to hear that Seth is heading back to the studio next week. It's a sign that things are returning to the pre-pandemic normal in New York, even though the pandemic is still raging elsewhere in the country.

Finally, I'm in the middle of grading final exams, which means I should be posting shorter entries with less thought required. In less stressful times, I might type that I'm mailing it in, but the way things are going with the Postal Service, I don't know if that will work for much longer.
Posted by Pinku-Sensei at 12:36 PM