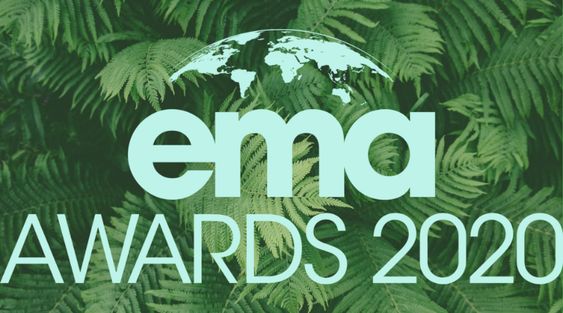 For today's Sunday Entertainment feature, I'm skipping the Emmy Awards to focus on the Environmental Media Association Awards, which held a virtual awards ceremony on Friday to "honor film and television productions and individuals that increase public awareness of environmental issues and inspire personal action on these issues." Here are the nominees and winners (in bold) from the Environmental Media Association (EMA) and The Hollywood Reporter with my comments.

"Dark Waters" was the one with an explicit environmental and political theme. I suggested it to the volunteers and members of Coffee Party USA in Coffee Party USA invites you to watch these political movies while staying safe at home and one of the readers at the Coffee Party USA Facebook Page thought it was one movie not on my shortlist worthy of a nomination. However, no one eligible actually voted for it, so it didn't earn a nomination. Too bad, although it probably wouldn't have beaten "Harriet," the big winner at the 2019 Golden Coffee Cups for Movies. Still, "Dark Waters" now has a win to go with its four nominations. Congratulations!

The one nominee I had heard of was Elephant, which my favorite royal, Meghan, Duchess of Sussex, narrated. If I had covered the nominations, like I did last year, I would have chosen it as the favorite. Furthermore, it was the only theatrical release. The others are television specials that didn't even earn Emmy nominations. Still, the EMA is free to determine eligibility as it sees fit and not follow the criteria of other awards granting bodies.

Since I haven't seen "Ted Turner: Captain Planet" and I suspect most of my readers haven't either, here it is from CNN Philippines.

Those who know him and his environmental work best paint the picture of a Ted Turner often lost in the headlines, but no less important. Hosted by Dr. Sanjay Gupta, Catch Ted Turner: Captain Planet to know more about his passion for the natural environment.

Now for the television awards.

I called the winner nearly a year ago in 'Chernobyl' dominates Limited Series with ten Emmy Awards.


I expect lots more awards for "Chernobyl," including Golden Globes, Critics Choice Awards, and all the various guild awards, followed by the EMA Awards to finish out its awards show run. However, the next honors may come from Coffee Party USA, as I expect "Chernobyl" to be nominated for the Golden Coffee Cup for Best Miniseries or Movie for Television about Politics and Government when I run the awards for the 2018-2019 season.

As for the other nominees, I'm glad to see stiff competition, unlike last year when "The Blacklist" was the sole nominee and winner. In particular, I'm glad to see "Snowpiercer" and "Madam Secretary" in the field. I need to watch "Queen Sugar" to see what it's all about.

The last category I've featuring above the jump is a new one.

I would have voted for "What's Eating America," which I think is a more explicitly political version of "Anthony Bourdain: Parts Unknown." That's what happens when MSNBC adapts a CNN show concept. News professionals would probably have voted for "60 Minutes." However, the EMA electorate wanted the series that was more expressly activist and focused on a trendier environmental issue. Good for them and congratulations to National Geographic. Also congratulations to the EMA for splitting this category off from reality television, which really was an unscripted television category where the documentaries would beat the true reality shows.

Speaking of electorates, maybe I should do for EMA what I did for the Saturn Awards, join so I can vote. That's a New Year's resolution for me.

Follow over the jump for the rest of the nominees and winners along with the video of the virtual awards show.


I begin this segment with a new version of an old award.

There has been a comedy category at the EMA Awards for longer than I have been covering them, but it combined episodic comedy series and variety series and the variety series usually won. This year's edition split comedy and variety into their own categories, which gave the episodic comedies a clear shot at winning. Based on the titles, I would have picked "It's Always Sunny in Philadelphia," but titles aren't everything. Congratulations to "Mixed-ish."

Speaking of variety shows, here they are in their own category — finally!

I'd have picked "Last Week Tonight with John Oliver" not only because it's the best of the bunch in general, but because it's a previous winner in the comedy category for "Coal." Congratulations! I just hope the show doesn't get sued over this episode like it was for "Coal."

In the video below, the presenters referred to "Tiger King," which is really a documentary, not a reality show, although it blurs the line (stripe?) between the two, just as the EMA did until this year. People certainly watched it as a reality show. I'm surprised it wasn't nominated in the documentary series category, but perhaps it wasn't eligibile. Just the same, I think "Shark Tank" is a worthy winner of the first pure reality show category, not because of the sharks themselves, but because of the entrepreneurs competing on the show. They often have good environmental products and services to pitch and they deserve to be recognized. "Shark Tank" has two Emmy nomiations, so I'll be blogging about it soon. Until then, congratulations!

Now for the final category.

"Sesame Street" didn't win for an Earth Day episode? I'm genuinely surprised. That's a combination that would have led me to pick it as the winner had I covered the nominees. Still, congratulations to PBS and "Nature Cat."

I conclude with the video of the virtual awards ceremony: 2020 EMA Virtual Awards. Enjoy the show!