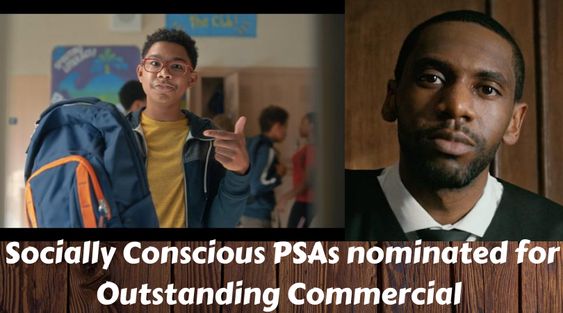 I concluded Kerry Washington promotes 'The Fight,' a documentary about the ACLU's legal battles with the Trump Administration by predicting that "Looks like I'll be busy with the Emmy Awards for the next two months. Stay tuned." As I have the past two years, I begin with the nominees for Outstanding Commercial as today's Sunday entertainment feature. Every year, at least one of them is a public service announcement (PSA) that makes an important social or even political point. This year is no exception as two of the nominated commercials are exactly that. Even better, both are continuations of ad campaigns that have been nominated before.

The first nominee I'm featuring is Back-To-School Essentials | Sandy Hook Promise, the same organization I used at the top of last year's post.

Survive the school year with these must-have back to school essentials.
...
**Please note that this PSA contains graphic content related to school shootings that may be upsetting to some viewers. If you feel that this subject matter may be too difficult for you, you may choose not to watch this video.**

When I searched for this video, I found that it sparked a lot of reaction from news programs. The most extensive was CNN's Sandy Hook mom talks to CNN about her group's shocking PSA.

The nonprofit Sandy Hook Promise launched a "back to school" PSA to raise awareness about school shootings. CNN's Alisyn Camerota talks about the ad with the group's managing director Nicole Hockley, whose 6-year-old son Dylan was killed at Sandy Hook Elementary school in 2012.

The gun control legislation Alisyn Camerota and Nicole Hockley mentioned is among the pile of "socialist" bills sitting on Mitch McConnell's desk waiting to die while he plays "Grim Reaper." In this case, his nickname for himself is a little too apt.

The other socially conscious PSA is by the same people behind "The Talk," which won two years ago. Watch Proctor & Gamble's "The Look."

Created in 2019, “The Look” uses historical references and contemporary stories to highlight the bias experienced by Black men in America. The film helps to build empathy, change perspectives, prompt personal introspection, and bring people together for conversation. Produced by Saturday Morning with Anthony Mandler and Malik Sayeed, the film is used as an educational tool at institutions across the country. A discussion guide and background on the inspiration for the film can be found at www.talkaboutbias.com

When I searched on YouTube for this video, I saw almost no discussion of it, in contrast to the Sandy Hook Promise PSA. CNBC came close with a discussion of the spot, but its video was about the next PSA in the series, "The Choice," which wasn't one of this year's nominees because it was released after the eligibility cutoff. Maybe next year.

As for why this video didn't get the attention either "Back-To-School Essentials | Sandy Hook Promise" or "The Choice" received, maybe it's because P&G uploaded it on June 2, 2020, right after I posted 1968 has arrived again with nation-wide protests and police attacks on press. As timely as the video is, there were more compelling images on the subject of racism circulating that drowned it out. Too bad, as this video deserves more attention. At least the Television Academy is giving it some.

Follow over the jump for more conventional commercials, including the one I think will win, even if it isn't as important as the two above.

I begin with the nominee that has what I consider to be the best production values, What did we do before Alexa?, which is nominated as Before Alexa for Amazon - Somesuch x Revolver/Will O'Rourke (Droga5 London).

Amazon's 2020 Superbowl ad
Hahaha! That's hilarious! It's also a contender, but it's not my personal favorite.

Bill Murray Super Bowl ad
This is my favorite and the other nominee I think will win.

I plan on continuing with this year's Emmy nominees later this week. In the meantime, stay tuned for a celebration of National Veep Day. With luck, Joe Biden announces his running mate. Otherwise, I am stuck writing about Mike Pence. I hope not.
Posted by Pinku-Sensei at 12:37 AM