I opened Mike Pence at Voteview and On The Issues for National Veep Day with a whine.

While that post was surprisingly successful, earning 382 default and 406 raw page views to rank 16th for August 2020, it wasn't what I wanted to write that day. Now that Joe Biden selected Kamala Harris and she was nominated at the Democratic Convention, it's time to compose the the entry I wanted to post on Veep Day. Better late than never! 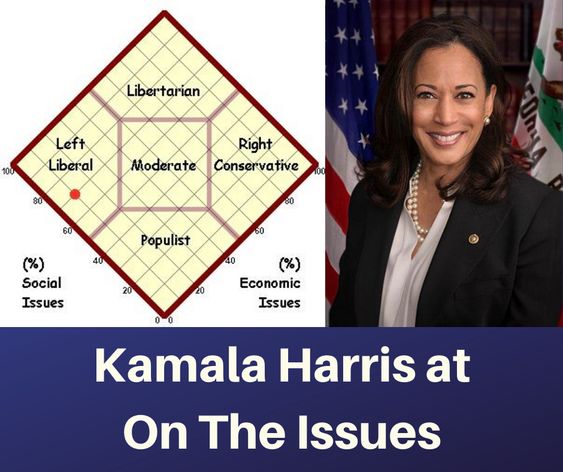 Ever since I made the first infographic meme for Harris using her On The Issues page, she has had to share them, first with Biden in OnTheIssues.org's take on the Democratic presidential candidates from left to center and then with Val Demings in On The Issues' take on Democratic Vice-Presidential contenders from left to center. Now that she's the Democratic Vice Presidential nominee, she finally gets an image to herself. As I first wrote last December, Harris left the campaign with an economic score of 10 and a social score of 73 and she re-entered the campaign with the same scores. 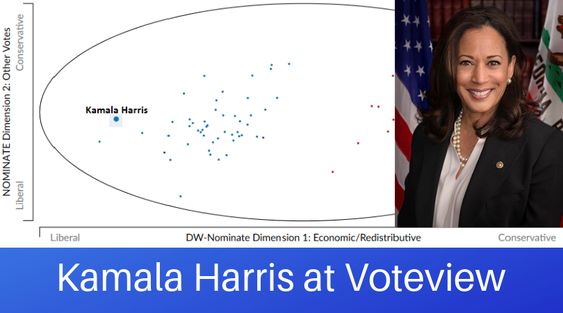 I'm being a good environmentalist and recycling the infographic I first created for Harris in Senators and Representatives running for the Democratic nomination are drifting to the left as they campaign in July 2019. While she has drifted both left and right since then, she has maintained an ideological score of -0.709 throughout August. It helps that the Senate has been in recess all month.

Follow over the jump for new videos of drink suggestions to toast Harris at the debates or other speaking events.

"I'm just waiting for Biden to choose to select the beverages for his running mate," I wrote on this year's Veep Day. I begin by recycling what I wrote for Harris in June 2019's Drinks for the Democratic debates, Part 2.

While Kamala Harris told Eater her favorite comfort food is french fries, U.S. News and World Report mentioned that her favorite restaurants are Amber India and Dosa in San Francisco. I couldn't find any alcoholic beverages on Dosa's menu, but Amber India's bar menu has some really interesting cocktails. Unfortunately, they're all unique, although one, the Pink Elephant, has several variants out in the wild. Any one of them will do.

I used this because it's a video featuring the former First Lady of New York State. Her ex-boyfriend, Governor Andrew Cuomo, is a Democrat.

Now for the cocktail I actually featured more than a year ago: "That written, Harris is from Oakland, California, and the most famous drink to come out of there is the Mai Tai from the original Trader Vic's." I embedded a Tipsy Bartender video for the recipe, but Skyy John has since taken it down. He uploaded a new video for the drink, but I don't think it has as much personality as How To Drink's recipe, so I'm using it instead.

In this episode of How to Drink, I’m making one of my favorite cocktails: the Mai Tai. The Mai Tai may be the pinnacle of Tiki glory and made the way Vic Bergeron invented it in 1944 with a balanced, spirit forward, glass of pure magic. Next time you find yourself at a Tiki Bar, or hosting a Tiki party make sure you have yourself a Mai Tai. You won’t regret it. Cheers!
...
Mai Tai Ingredients:
- 1 oz or 30 ml of Jamaican Rum
- 1 oz or 30 ml of Rhum Agricole
- .5 oz or 15 ml of Dry Curaçao
- .5 oz or 15 ml of Orgeat
- .25 oz or 7 ml of Rock Candy Syrup
- 1 oz or 30 ml of Lime Juice
- Shake
- Serve over Crushed Ice
- Garnish with a Sprig of Mint

Now for a completely new drink suggestion inspired by Harris's Jamaican ancestry on her father's side. Out of all of Tipsy Bartender's Jamaican recipes, I've chosen the most recent, Jamaican Me Happy Punch.

What?! The mixer in this punch is Seagram’s Escapes! Jamaican me thirsty!!

And there you have it!

I plan on recycling these graphics and drinks along with those for Pence for this year's Vice Presidential Debate. In the meantime, stay tuned for the next installment in my coverage of the Emmy Awards.
Posted by Pinku-Sensei at 5:02 PM