Kunstler thinks the Left is ignoring Dominionism; I tell him we're not 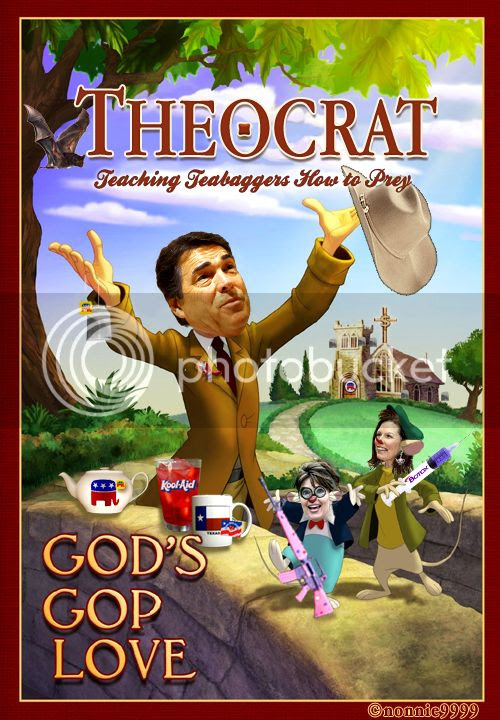 Full-sized original by Nonnie9999 at Hysterical Raisins as Theocrazy


Yesterday, James Howard Kunstler dropped the following paragraph in the middle of his weekly missive of impending doom.


Given the situation, it's not unthinkable that self-styled Texas secessionist Rick Perry could be the next president. On top of that, the guy is a Christian Dominionist nut. This outfit wants to capture all politics, culture, and media in what is now the USA and turn them into a sci-fi nightmare of correct thinking. You have no idea how dangerous and determined this group is. The Left ignores them at the peril of everyone. They are the corn-pone Nazis I've been warning you about.

I couldn't resist responding to him, by telling him he was wrong--not about Perry, but about what passes for the Left in the United States--in the most encouraging way possible.


I'm glad to see Jim call out Perry and the Dominionists for what they are--corn-pone fascists who have appeared in America exactly as Upton Sinclair predicted, carrying a cross and wrapped in the flag. In fact, I'm glad that he used the word Dominionist at all. It turns out that it's only the second time he has in this blog, the first being more than four years ago. [You can find that first time here; scroll down to The Big Chill, the entry for February 19, 2007] I bet a lot of you weren't reading him back then. I know I wasn't...

A good chunk of the Left is taking the Dominionists seriously. People on Daily Kos have been writing about them for at least five years. In fact, two of the most read diaries yesterday were about Dominionists and the long-term threat they pose to democracy. That fear is one of the reasons that a lot of people on the Left are scared out of their wits by Perry (and Bachmann and Palin). Now, if only the Democratic Party leadership would listen to the DFHs. The hippies have been right before.

It ended up being three of the most read diaries on Daily Kos for the past two days.


First, Chip Berlet posted Inside the Christian Right Dominionist Movement That's Undermining Democracy in which he reacts to liberals' fears about Perry, Bachmann, and Palin flirting with Dominionism by describing Dominionism's defining characteristics, summarizing its history and major movements, and explaining its dangers to pluralism and democracy.

Fred Clarkston followed up with Deep Background on Dominionism in which he posted excerpts from two series on Dominionism that were published on Talk to Action, a site about threats to religious and political freedom from religious extremists. The first series chronicled how Dominionists had hijacked the Texas Republican Party and the Southern Baptist Convention. The second analyzed the booklet America, Return to God, which contains essays by prominent leaders of the religious Far Right.

Both Berlet's and Clarkston's diaries were first published on Talk to Action and republished on Daily Kos in a coordinated effort. I highly recommend you read both diaries and, if you have time, the essays that Clarkston links to.

The third diary was posted independently by SueM1211. Just Slamming GOP Candidates' Religion for No Apparent Reason? responded to Tim Stanley's own response to Paul Krugman's condemnation of the GOP as anti-science. Sue M pointed out the false premise of the opinion piece in the following paragraph.


The post is about how the "liberal media" is already slamming the religious beliefs of the GOP candidates. Predictably, he skips over the very important point that the GOP candidates are actively courting their extreme right-wing Christian base by promising to push legislation based on Christian doctrine, which is directly opposed to the separation of church and state guaranteed in our Constitution.
...
Basically, Dr. Stanley is trying to say that there's no basis for the "liberal media" to bring up the GOP presidential candidates' religious views. And the media wouldn't, if the candidates were not RUNNING ON THEM! This is a larger point that the doctor does not address in his post.

Really, I don't care what religion a candidate is. That's their business, until they try to legislate everybody else's lives based on their religious doctrine. That is where I have a problem.

Anyway, just wanted to point this out. I really hope The Rude Pundit was right, that this is the dumbest thing I read today. But it isn't even 9am on the West Coast yet, so we'll see!

I'm an agnostic, but I'm not such a dogmatic rationalist that I'm going to ignore what looks like the universe, but is really a group of fellow liberals on the Internet, all telling me the same thing at the same time, four of them independently of each other. If nothing else, all are responding simultaneously to the same stimulus.

As you can read, seven different people on what passes for the Left in the U.S., Kunstler, Berlet, Clarkston, Krugman, Sue M., Nonnie9999 at Hysterical Raisins, whose poster from three days ago illustrates this entry, and myself, are all taking Dominionism seriously. We are definitely not ignoring the threat Dominionism poses to democracy and a pluralistic society.
Posted by Pinku-Sensei at 8:55 AM