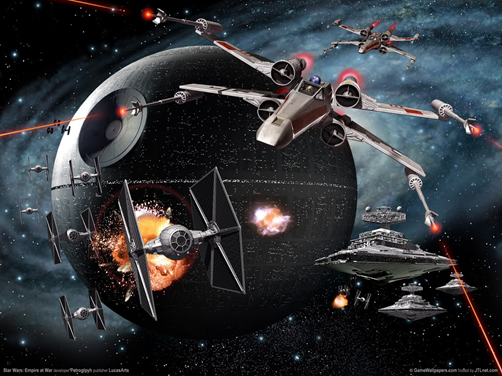 On December 14th of last year, Kotaku reported Petition to Build the Death Star Gathers Enough Signatures to Rate a Response from the White House.  A month later, The Guardian was among many to relay the White House's response.*

Paul Shawcross, the head of the science and space branch at the White House Office of Management and Budget, outlined the reasons why the White House was not planning to build a Death Star, an artificial planet used with devastating consequences in the Star Wars films.

He said the estimated cost of $850 quadrillion would not help deficit reduction plans and asked: "Why would we spend countless taxpayer dollars on a Death Star with a fundamental flaw that can be exploited by a one-man starship?"

The original has a clever title, This Isn't the Petition Response You're Looking For, which I thought was one of the best things about the reply, along with a listing of all the science and space accomplishments of the Administration and a burnishing of Obama's nerd credentials.

As for the cost the official response cited, it came from Centives, a blog written at the time by a couple of economics undergraduates at Lehigh University.  It turns out to be a severe underestimate, as the figure is for just the steel.  One reader noted in comments that the total cost of modern warships is ten times that of the steel alone.  Add cost overruns, and the price would be about one sextillion dollars.  That's one followed by eighteen zeros.  No wonder the people at The Monkey Cage blog wrote Death Star? No thank you.

The story didn't end there.  Fast Company as republished in Scientific American reported the next reaction by the Obama Administration.

Tired Of Star Wars Fans, The White House Is Raising The Bar On Online Petitions
By Anya Kamenetz
January 18, 2013

Mother Jones elaborates on this news in the aptly titled "My God, What Have We Done?": White House Staffers React to Insane Online Petitions.  That makes me glad I didn't sign the petition.  That way, this was not my fault!

*I found two other articles worth reading about the release.  PoliticusUSA added visuals to the response in the good-natured No Death Star, ‘The Administration does not support blowing up planets’.  So did Wonkette, who added their trademark snark in Obama Administration Crushes Nerds’ Dreams, Will Not Build Death Star.
Posted by Pinku-Sensei at 8:00 AM