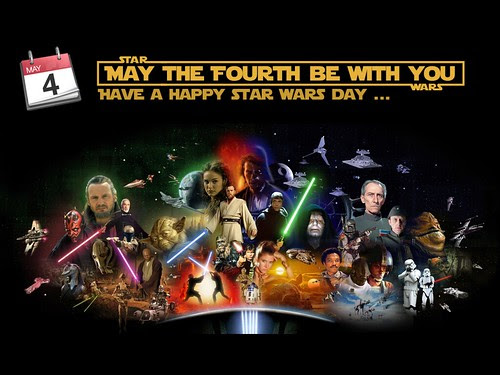 
To celebrate Star Wars Day, I'm going to be a good environmentalist and recycle.


I have one final piece of Star Wars music to play. On their YouTube channel, DCI Fan Network featured one of the two drum and bugle corps I marched with, the 1978 North Star, as the corps for Star Wars Day.

May the 4th be with you!

Now, a video from this year: A Star Wars Day Message from NASA

In celebration of Star Wars Day, NASA flight engineer Rick Mastracchio hopes to deliver a special message from the International Space Station. Little does he know, however, that the Empire plans to jam his transmissions. Thankfully, R2-D2 is on the case.

I'll be back with more Star Wars Day entries later, just as I did last year.
Posted by Pinku-Sensei at 1:09 AM