From the same Overnight News Digest: Science Saturday (100% of California in drought) that included the video in Nourish: Growing lettuce on the ISS come the following article and video about how large meteor and asteroid explosions and impacts turn out to be more common than usually thought.  First, Iain Thomson of The Register (UK) reports Asteroids as powerful as NUCLEAR BOMBS strike Earth TWICE YEARLY.

Between 2000 and 2013, the Earth was hit by 26 asteroids that exploded with a force of between one and 600 kilotons – an average of one every six months. Even more concerning is that in all cases the asteroids themselves weren't detected in space and only came to light when they detonated in Earth's atmosphere.

The study was carried out by the B612 Foundation, a group set up by three former astronauts who are worried about the threat of asteroids to life on Earth.

Looks like a bunch of Crazy Eddies after my own heart.  Here's the video the B612 Foundation released last week.


Discovery News had their own take on this report in Why Does Russia See So Many Meteors?

A few days ago, a fireball lit up the skies over Murmansk in Russia. It seems like Russia sees more meteors than the rest of the world. Trace is joined by Ian O'Neill from Discovery News to discuss why this is.

As a reminder of why I think asteroid impacts are an important topic, here's what I had to say about it in In Russia, space explores you!


This blog is still about how to avoid the collapse of the current civilization and takes a science-fiction slant on the topic.  An asteroid impact is the perfect merger of the two.  On that note, I leave you this graphic I took from Nebris. 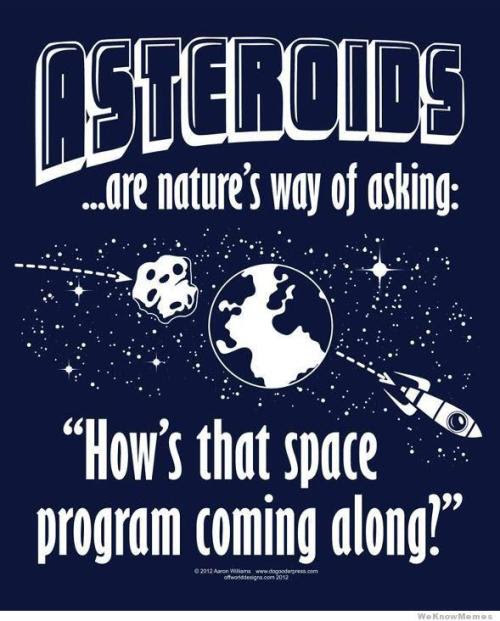