Earth and Mars in this week's space and astronomy news 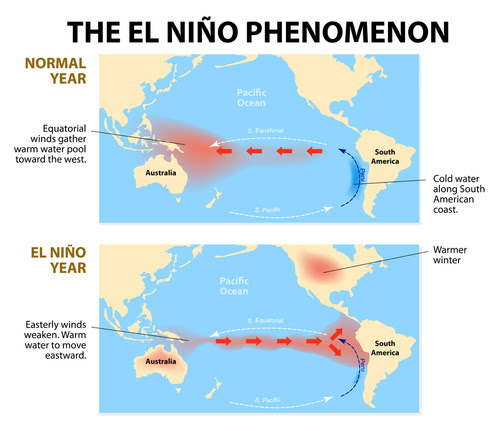 Leading off this week's space news roundup from Overnight News Digest: Science Saturday (Hurricane season arrives) are two videos about the Earth as observed from space by NASA.

First, Science at NASA asks a question about a topic mentioned in Hurricane forecasts as the season begins, ScienceCasts: El Niño - Is 2014 the New 1997?

The Jason-2 satellite sees something brewing in the Pacific. Researchers say it could be a significant El Niño with implications for global weather and climate.

NASA's OCO-2 mission, scheduled to launch July 1 from Vandenberg AFB, California, will make precise measurements of carbon dioxide in Earth's atmosphere. The orbiting observatory is NASA's first satellite mission dedicated to studying carbon dioxide, a critical component of Earth's carbon cycle that is the leading human-produced greenhouse gas driving changes in Earth's climate. OCO-2 will provide a better understanding of the sources of carbon dioxide emissions and the natural processes that remove carbon dioxide from the atmosphere, and how they are changing over time.

Follow over the jump for the news from and about Mars, along with This Week at NASA and other general space news.

This Week at NASA

The Morpheus prototype lander took to the skies above the Kennedy Space Center to test a suite of landing and hazard avoidance technology and self-navigate to a safe landing. Over in Hawaii, NASA's Low-Density Supersonic Decelerator, a rocket-powered, saucer-shaped test vehicle, has completed final assembly and will be flown in an experimental flight test is planned for June. And, NASA is moving ahead with construction of the lander for the InSight mission to Mars where it will probe the Martian sub-surface. An ISS Science Forum took place Wednesday at Johnson Space Center, a Spacex Dragon Cargo craft departed the space station while a new expedition crew trains in Russia and students launch rockets that reach nearly 20,000 feet this week on This Week at NASA!

Daily Kos has more general space and astronomy news in This week in science: bad moon rising by DarkSyde and Intelligent Life in the Galaxy – Are We Alone? by liberaldad2.

Next, the news from and about Mars, beginning with the University of Arkansas reporting Earth Organisms Survive Under Martian Conditions.

Methanogens sustain life under extremes of heat and cold

FAYETTEVILLE, Ark. - New research suggests that methanogens - among the simplest and oldest organisms on Earth - could survive on Mars.

Methanogens, microorganisms in the domain Archaea, use hydrogen as their energy source and carbon dioxide as their carbon source, to metabolize and produce methane, also known as natural gas. Methanogens live in swamps and marshes, but can also be found in the gut of cattle, termites and other herbivores as well as in dead and decaying matter.

Methanogens are anaerobic, so they they don't require require oxygen. They don't require organic nutrients and are non-photosynthetic, indicating they could exist in sub-surface environments and therefore are ideal candidates for life on Mars.

I'll be lecturing about Archaea next week, and I'll be sure to mention this to my students.

Scientists using NASA's Mars Reconnaissance Orbiter found a fresh meteor-impact crater, and by golly it's big. It's the largest ever located anywhere by using before-and-after pictures. Using the initial pictures, scientists could nail down the time of impact to just 24 hours between March 27-28, 2012. Using the higher resolution cameras on MRO, scientists spotted not only the crater but possible landslides that occurred as a result of the impact. Deputy Project Scientist Leslie Tamppari explains.

Next, research for future Mars missions in LDSD: We Brake for Mars (Part 2).

In part 2, JPL engineer Mike Meacham explains how an inflatable decelerator will help larger spacecraft land on Mars. The device will be tested at the Pacific Missile Range Facility in Hawaii in June, 2014.

Part 1, LDSD: We Brake for Mars was included in Asteroids from Mars and Earth from space in this week's space news leftovers.

Finally, Discovery News has this serving of space news leftovers in Can Crowdfunding Save A Retired Satellite?

The International Sun-Earth Explorer 3 was launched in 1978, but was retired in 1997 by NASA. Now, NASA approved a crowdfunded plan to rescue this sun-orbiting satellite before we lose it forever! Trace explains why so many people are passionate about saving this retired satellite.

That's it for this past week's space and astronomy news and also the end for this month's entries.  I'll be back next month, which is only a few hours away.