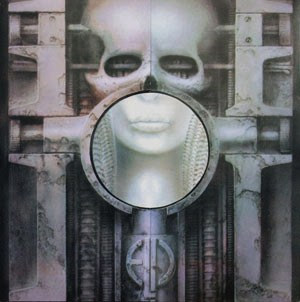 
Swiss surrealist artist H.R. Giger who designed the monster and revolutionary sci-fi sets for the film "Alien" has died, his museum said on Tuesday. He was 74.

Giger, who was born Hans Rudolf in the eastern Swiss town of Chur in 1940, died on Monday in Zurich from injuries he obtained after suffering a fall, an employee of the H.R. Giger Museum said, confirming reports in Swiss media.

Famous for creating the otherworldly creature in Ridley Scott's 1979 horror film "Alien", Giger was awarded an Oscar for Best Achievement in Visual Effects in 1980.

Giger also painted the cover art for Emerson, Lake, and Palmer's "Brain Salad Surgery" and was the concept artist for a failed attempt at a Dune movie.

Above originally posted to deathwatch at JournalFen.  Follow over the jump for the value added section here at Crazy Eddie's Motie News.

Forbes embedded the trailer for the documentary about the version of Dune Giger worked on: Jodorowsky's Dune (2014).

In 1973, film producer Arthur P. Jacobs optioned the film rights to Dune but died before a film could be developed. The option was then taken over two years later by director Alejandro Jodorowsky, who proceeded to approach, among others, Peter Gabriel, the prog rock groups Pink Floyd and Magma for some of the music, artists H. R. Giger and Jean Giraud for set and character design, Dan O'Bannon for special effects, and Salvador Dalí, Orson Welles, Gloria Swanson and others for the cast.

Frank Herbert traveled to Europe in 1976 to find that $2 million of the $9.5 million budget had already been spent in pre-production, and that Jodorowsky's script would result in a 14-hour movie ("It was the size of a phonebook", Herbert later recalled). Jodorowsky took creative liberties with the source material, but Herbert said that he and Jodorowsky had an amicable relationship. The project ultimately stalled for financial reasons. The film rights lapsed until 1982, when they were purchased by Italian filmmaker Dino DeLaurentiis, who eventually released the 1984 film Dune, directed by David Lynch.

Too bad this version of "Dune" didn't make it to the screen.  My opinion of the DeLaurentiis/Lynch version at the time was that all the money was spent on casting, costumes, sets, and special effects, and not enough on the script.  I later found out that the problems with the script were the result of executive meddling in the editing, cutting out key scenes that held together the movie.  No matter who's to blame, the result was a disappointment.

That written, I'm glad Giger's work has been brought to wider reknown and that at least some kind of movie has been made from the material.