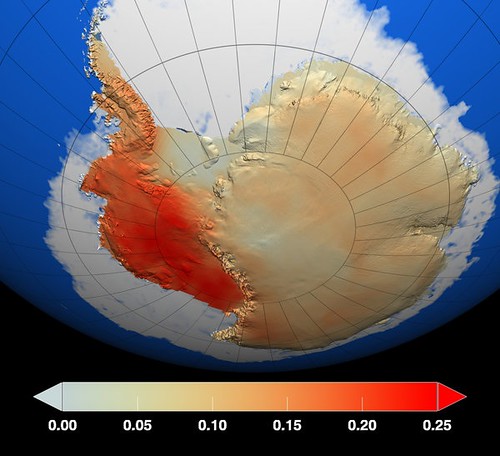 It's time to post the big environmental and collapse-related news of the past week which is the lead story of Overnight News Digest: Science Saturday (West Antarctic ice sheet collapsing) on Daily Kos tonight.

ScienceCasts: No Turning Back - West Antarctic Glaciers in Irreversible Decline

A new study led by NASA researchers shows that half-a-dozen key glaciers in the West Antarctic Ice Sheet are in irreversible decline. The melting of these sprawling icy giants will affect global sea levels in the centuries ahead.

Follow over the jump for the news from the scientist's mouth himself in two videos from JPL.

Glaciologist Eric Rignot of NASA's Jet Propulsion Laboratory and the University of California, Irvine, narrates this animation depicting the processes leading to the decline of six rapidly melting glaciers in West Antarctica. A new study by Rignot and others finds the rapidly melting section of the West Antarctic Ice Sheet appears to be in an irreversible state of decline, with nothing to stop the glaciers in this area from melting into the sea.

West Antarctica Glaciers: Past the Point of No Return

A rapidly disappearing section of the West Antarctic Ice Sheet appears to be on an unstoppable path to complete meltdown. The glaciers contain enough ice to raise global sea level by 4 feet (1.2 meters).