By request, 'Everybody Knows' 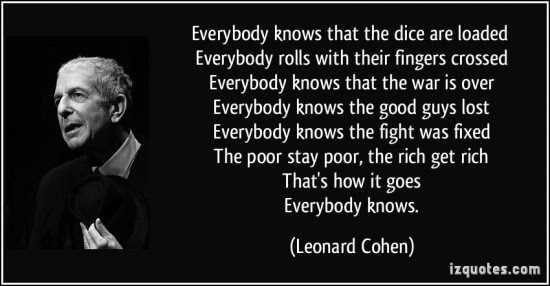 I concluded A conversation with Kunstler and his readers on militarized police with a footnote about my response to Kunstler's essay Ferguson.

I linked to the law is an ass with music by Leonard Cohen in my comment.  That got a lot of responses two weeks later, a reaction that deserves a blog entry of its own.

Here's the relevant portion of my comment, which refers back to A picture of hope and innocence from 40 years ago.

After Zimmerman was acquitted, I said I would post "the law is an ass with music by Leonard Cohen."  I found something else to post instead.  This time, I followed through.  Cohen's "Everybody Knows" as performed by Concrete Blonde seemed like a good response to the grand jury decision, as well as to the general situation.

The readers remembered my posting the link to the song and mentioned that in the comments to Crash-O-Matic Finance, beginning with dannyboy.

Hat tip to whomever it was that linked the Leonard Cohen song of the same title.

To whomever it may concern: Please take a bow for that link a couple of weeks ago. It kinda changed my perspective."

DannyBoy invited me to take a bow, so I did.

Thank you.  That was me.  I linked to it in The law is an ass with music by Leonard Cohen in the comments to Ferguson.  I'm glad you and ozone enjoyed and appreciated it.

That wasn't the only commenter at Kunstler's blog who enjoyed the song.  Follow over the jump for the rest.

I mentioned Ozone in my comment.  Here's what he had to say, first to dannyboye.

dannyboy,
I forget who that was, but I played it twice (just because it's so intense and goes over well) in a 4 hour gig yesterday. Were you hiding in plain sight with a drink in your hand? ;-)
Keep it percolatin'!

I enjoy the song. I enjoy drinking. And I now enjoy your camaraderie (Is that a political word? I don't care.

Thanks, N.V.
I think Leonard Cohen is [in part] lauded for mentioning some ugly realities in his paeans to human absurdities and missteps. (…at least by me. lol)
I’ve been doing that particular tune for a couple years now, and even those unfamiliar with it really seem to ‘get the message’.
“…that’s how it goes… everybody knows.”

I also got an acknowledment from dannyboy.

For me it’s been quite a trip from my “Not Knowing” to getting it.

For so long, I kind of looked at these deceptions one-at-a-time. Framed the whole thing wrong. I was as ridiculous.

Once the SHTF it all came together. All became known.

Whenever I shared myself with anybody who’d been put really down, they’d let me know just deeply they’d “Known”.

I’m feeling that this “Everybody Knows” is coming out to the surface fast now.

This will be the force that unites.

K-Dog, who comments here from time to time, provided the lyrics and a link.

‘Everybody Knows’ yeah that’s how it goes.

K-Dog got his own recognition from ZrCrypDiK.

Haha, K-D – Now I get why “they” (you?) claim Robert Plant/Led Zeppelin ripped off all their material.

Since K-Dog provided the link, here's the video.


For what it's worth, promoting "The law is an ass with music by Leonard Cohen" at Kunstler's blog paid off.  As of the end of the year, it was the 9th ninth most read entry during the month with 93 page views during December, more than half of the 180 total since it was posted in November.  Posting the link again by request worked!