I concluded The corner station charges into No Mans Land for the first time in 2015 by noting that "Ruby's odometer rolled over 89,000 miles yesterday.  Stay tuned for another driving update."  Time to reward my readers' patience.

As I noted in Driving update for September 2014: Ruby, our car's odometer rolled over 88,000 miles on September 27, 2014.  That meant it took my wife and I (mostly me, as I took over driving Ruby as I prepared to say farewell to Yuki) 101 days to drive the 1000 miles.  That translates into 9.90 miles/day and 301.95 miles/month, only 0.28 miles/day and 8.68 miles/month more than during the period covered by the previous update.  I expect that to go up as I adjust to living slightly farther from one workplace and much farther from another and also residing in a car-dependent neighborhood.

As for the year-over-year comparison, my wife and I drove Ruby much more than during the comparable period in the second half of 2013, when it took 140 days to her 1000 miles for an average of 7.14 miles/day and 217.9 miles/month.  A better comparison would be with Yuki.  I drove her 12.5 miles/day and 381.25 miles/month during October to December, so the mileage on the car I drive most actually decreased.

Follow over the jump for the calculations for both cars and how my driving compares to the national trend.

My wife and I are following right along with the national trend of increasing our miles driven, according to Calculated Risk, which reported DOT: Vehicle Miles Driven increased 2.6% year-over-year in October. 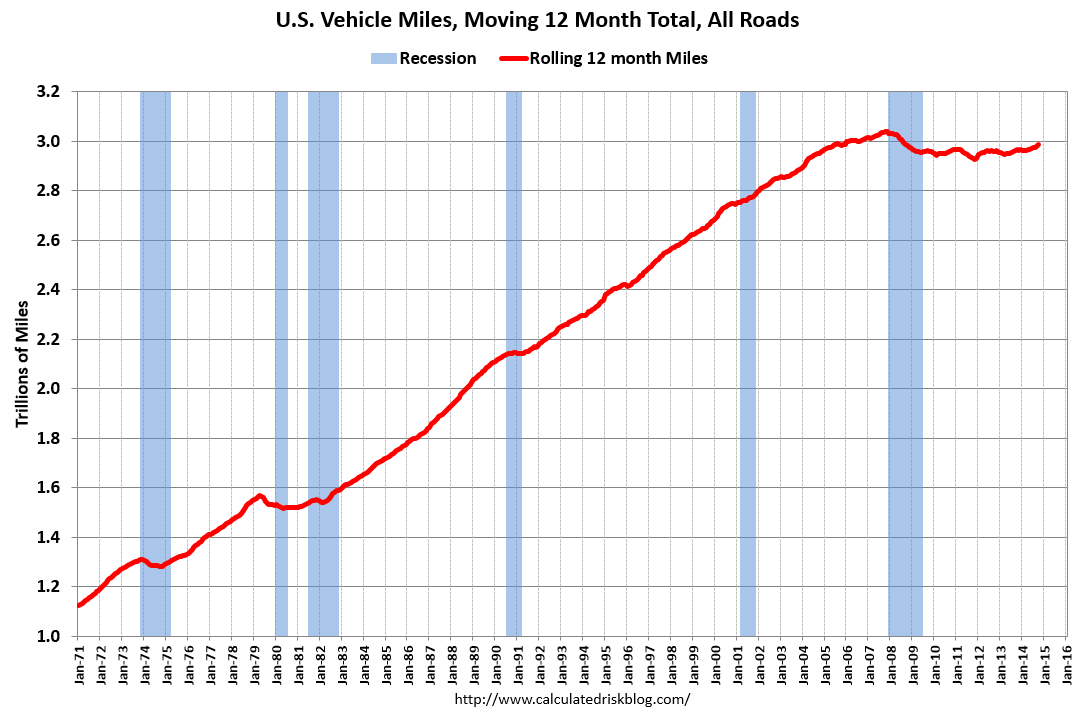 The bad news is that we, along with the rest of the country, are driving more.  The good news is that, on average, we're still driving less than we were during 2007.  Given the low gas prices and improving economy, that might not last long.