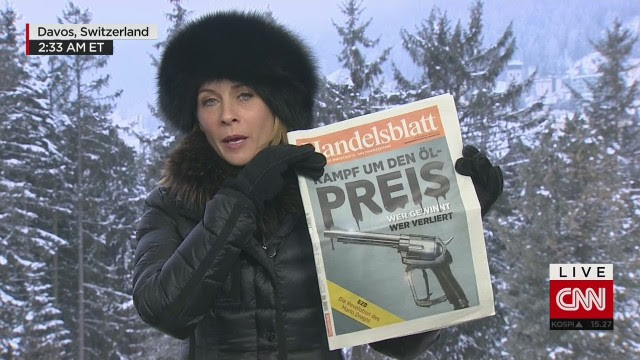 The same day that I wrote about the Doomsday Clock advancing to 11:57, King Abdullah of Saudi Arabia died.  Kunstler himself expected that would happen soon, as he wrote in A Solemn Pause just last Monday.


The next chapter in the oil story is more likely to be scarcity rather than just a boomerang back to higher prices. The tipping point for that will come with the inevitable destabilizing of Saudi Arabia, which I believe will happen this year when King Abdullah ibn Abdilaziz, 91, son of Ibn Saud, departs his intensive care throne for the glorious Jannah of virgins and feasts.

I don't think Kunstler was actually predicting that His Majesty would die this week, but it certainly made his essay even more timely.  It also set the stage for what he'll write the day after tomorrow.  I'm sure the royal death will figure prominently in the Monday blog post.

As for whether Kunstler's forecast of instability leading not just to higher prices but also to outright scarcity is panning out, the answer is not yet.  Christopher Helman of Forbes went so far as to declare that King Abdullah's Demise Will Be A Non-Event For Oil Prices.


The death of Saudi King Abdullah yesterday will be a non-event for oil prices. There was a quick spike in oil when Abdullah’s death was confirmed, but that quickly faded, and U.S. crude is flat to slightly lower this morning at $46 a barrel. Brent crude is up a pinch to $49.

That's pretty much where the market stood at the close on Friday, with Oil-Price.net showing WTI down 72 cents for the day at $45.59 and Brent up 27 cents at $48.79.  Brent seems to have found a bottom with the King's death, while WTI is still searching for one.

Follow over the jump for more of Helman's predictions, along with more from Kunstler, me reacting to him, and two videos from CNN.

The above was the immediate impact.  What about the longer-term effects?


The Saudis rule by committee and consensus, not by royal edict, and there is every indication that King Salman will keep the status quo.
...
Within a kingdom that desires stability above all else, there will be no quick change in Saudi oil output, no tightening of the spigots to bring price relief to anxious American frackers.

On the contrary, it is not at all unlikely that the Saudis have encouraged and orchestrated excessively low oil prices during Abdullah’s decline and demise in order to keep the world calm about the security of supply during this time of political transition. It may be hard for people in the oil industry to relate to this sentiment, but about 99% of the population actually prefers low oil prices and doesn’t give a damn if oil drillers go bankrupt.

So in the short term, this Saudi changeover should be a nonevent.

Helman thinks that the important change of power is two transistions away, when one of the grandsons of Ibn Saud takes the throne.  That could be years if not decades away.  If Helman is right, that will be the time to look for instability.  If he's wrong, then Kunstler will be proven correct in short order.

Speaking of Kunstler, he predicted that cheap gas at the pump will be gone soon.


In short, enjoy the $2.50-a-gallon fill-ups while you can, grasshoppers, because when the current crop of fast-depleting shale oil wells dries up, that will be all she wrote.

I'm embedding a video from CNN that includes a quote from Ross Perot, Jr., about the effects on tight oil farther down the post.  Right now, I'm sharing my response to Kunstler.


It's $2.50 where you are, as GasBuddy shows the average price for Albany, the nearest major city to you in its database, as $2.48, but it's much lower elsewhere.  The national average is $2.05 and here in Detroit it's $1.83.  In my old neighborhood, three stations were selling regular for $1.75 last Friday.

When I drove through my old neighborhood, those three stations were still selling regular for $1.75, although the corner station had charged into No Man's Land for the second time since my previous report to $1.99.  The previous advance ended with an ignominious retreat to $1.75, but I'm not so sure this one will.  GasBuddy shows an actual price spike in the Detroit market, with the average price rising from $1.83 on Wednesday to $1.90 on Friday--this after hitting a low of $1.81 on the 15th, followed by a week of stability at $1.83.  A price of $1.79 to $1.85 would be much more in line with the local price environment than $1.75, so I expect prices will start rising.  It's about time; the gas price roller coaster usually begins its ascent in late December.

The above is happening at the retail level and follows seasonal patterns that would occur regardless of the price of oil.  What about the effects at the producer level?  CNN has two videos on that topic.  First, How are falling oil prices affecting oil producers?

CNN's John Defterios explores how the tumble in the oil price to five-year lows is affecting attendees to the World Economic Forum.

The next, which includes Ross Perot Jr. on the effects on U.S. oil producers, is Oil prices top agenda at the World Economic Forum.

The Middle East can handle the lower price because of lower production costs. Producers like the U.S. will have to weather the storm.

Perot predicted a production decline of half a million barrels a day within six months.  That plays into the scenario I've described before, including the conclusion of my response to Kunstler last Monda


y.As I've written here and elsewhere,when the price of oil goes up 50% or more in a year, the U.S. goes into recession.  As soon as the shale plays start to dry up and the level of consumption goes up, that will happen.  I expect that will begin late this year or early next.  All it will take is a 12-month stretch of $80 oil after a 12-month stretch of $50 oil.  We're not quite halfway through the first, so the full effects may not hit until after the 2016 election.  We might actually see Hillary vs. Jeb after all, although the winner may feel they got a booby prize.

The experts at Davos quoted by CNN foresee a gradual rise from $50 to $80.  If so, then it may not be enough to trigger a recession according to the model I'm using.  If the rise is more sudden, then the economy should slow down as I described.  Stay tuned.