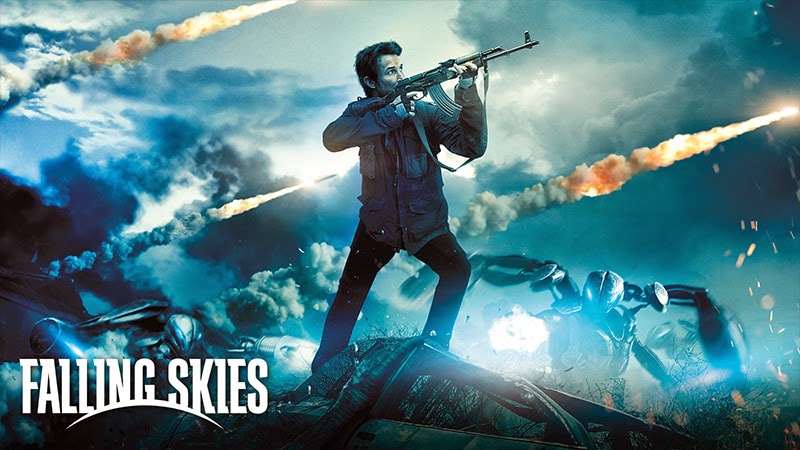 I telegraphed the subject of today's post in the conclusion of 'The Last Ship' returns and other summer TV fare.

I'll do the same for "Falling Skies" and "Defiance" next week, when I'll elaborate on what I wrote in the footnote to Detroit fireworks show continues for yet another year.

The first season of "Defiance" reminded me of "Babylon 5," except on Earth.  The second season so far confirms that impression.  "Falling Skies" looks like "The Walking Dead" with aliens instead of zombies and other people as the antagonists and allies.  Given that I've mentioned "Babylon 5" only once until now, and that in passing, while I've mentioned "The Walking Dead" in at least nine entries so far, it should come as no surprise that I like "Falling Skies" more.

Despite the different inspirations for the two alien invasion series, the two shows followed common paths last season.  Both "Falling Skies" and "Defiance" introduced two tropes about controlling conquered populations, secular totalitarianism and religion in the form of a false Messiah.  In a further similarity, both shows had the daughter of the male lead as the false Messiah.  Furthermore, the fathers concluded the seasons by redeeming their daughters.  I think these are the kinds of coincidences that strike me as the result of something in the culture that both are responding to.

Follow over the jump for the rest of the essay along with a preview of the final season of "Falling Skies."

Both "Falling Skies" and "Defiance" dressed up last season's antagonists in totalitarian uniforms to show a particularly modern human way of gaining and keeping control.  In the case of "Falling Skies," the conquering aliens demonstrated that they were learning from their human captives by recruiting young people to run totalitarian-style indoctrination camps, where they brainwashed their fellow young people into loving their conquerors and turning in their resisting parents.  I say totalitarian because both varieties, Communism and Fascism, were represented equally to produce a generic variant.  While I thought the techniques used appeared very Stalinist-Maoist, the uniforms looked like those of the Hitler Youth.  Either way, it was a human, if evil, solution to the problem of getting people to behave.  I thought it would be more effective than what the aliens were doing controlling young minds through implants and converting them into Skitters, both of which were very non-human.  That's not all.  The aliens also rounded up the humans into concentration camps where kept the adult inmates until they implemented their version of a Final Solution, which was to convert the humans into Skitters.  Thinking about it a year later, the writers really did play up the parallels to the Third Reich.

"Defiance" played the totalitarian themes in a different way, with the Earth Republic moving into Defiance and taking over the government from the locals, replacing a democratically elected mayor with an appointed governor that did the Earth Republic's imperial bidding.  The new regime was both brutal and corrupt.  To drive home the point, their soldiers wore uniforms reminiscent of the Third Reich.  One of the characters is even nicknamed "Berlin."  Nothing like Putting on the Reich to mark someone as the bad guys.

In both series, the totalitarian imagery faded as the two shows moved on to their false Messiah plotlines.  In those, the aliens installed a young prophet promising either peace in the case of "Falling Skies" or rebirth and redemption in the case of "Defiance."  Their evocation of the religious impulse worked much more effectively than the brute force and brainwashing of the totalitarians, an important lesson to learn; love, however misplaced, is stronger than hate and fear.

In both shows, the prophets were real ones in that they had real mystical powers, however science-based the writers tried to make them, but false in that they were actually pawns of the aliens who were using them to bring even more death and destruction to Earth.  Once their true roles were discovered, the girls' fathers broke through to them and got them to turn against the aliens who were controlling them, stopping them as unwitting agents of their alien overlords.  This worked out better in "Defiance," where both father and daughter survived into the next season.  On "Falling Skies," the father survived the season finale, but it seems his daughter sacrificed herself to redeem herself.  At least he has his three sons, but I'm not sure how his second wife will take it.

Except for Berlin, who is still around as a Lawkeeper, the fake fascists of the Earth Republic are no longer around on "Defiance."  After the assassination of the governor, they bugged out of town.  That's not necessarily good news.  They make have been "humans first," but they weren't genocidal maniacs, another legacy of the Nazis.  Someone who is a genocidal megalomaniac now threatens Defiance and he's out to eliminate humans.  Between him and a new storyline about the power of religion and legend, which involves a science-fiction version of an ancient horror that combines sorcerer, devil, and vampire, there will be lots of conflict and destruction this season.  Three episodes in, I'm already enjoying it.

While "Defiance" is still exploring the power and legacy of both totalitarianism and religion as means of control, "Falling Skies" is wrapping the show up.  I don't know if either theme will play a role this season, but I expect a lot of heroics and blowing things up leading up to a final conflict.  Based on the trailers and reviews, it should be satisfying.  I'm looking forward to the final season, which begins tonight at 9:00 PM EDT tonight.