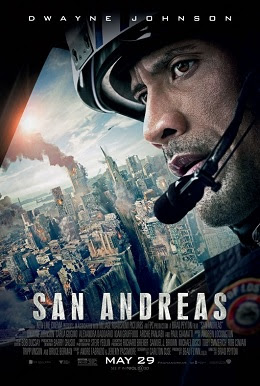 I examined speculative fiction, politics, crime, and history at the 2015 Critics' Choice Awards this past Sunday not only because I enjoy awards shows and wanted to direct some attention to the genres I watch, but also because I didn't want to devote any more attention than necessary to the movie I knew would come out on top of the box office, "San Andreas."  From the trailers alone, I could tell that the movie would be full of bad science in the service of action and special effects.  If I could have gotten away with ignoring the film entirely, I would have.

Then my students started asking me about it.  I told them that the level of destruction wouldn't be that high and that the San Andreas is the wrong kind of fault with the wrong kind of motion to produce tidal waves.  I also told them to watch an ABC News video that debunked the movie.  Here it is so they can find it more easily--'San Andreas' Debunked: What the Earthquake Film Got Wrong.

Unlike in the movie, an 8.3-magnitude quake is likely the worst California could expect, a seismologist said.

There, everything I said and then some.  Thank you ABC News.

For the news about the weekend box office, follow over the jump.

Dwayne Johnson's "San Andreas" has delivered a dominating $53.2 million opening weekend at 3,777 U.S. locations, soaring past recent forecasts of a $40 million launch for the Warner Bros.-New Line 3D disaster pic.
...
"San Andreas" underlines Johnson's drawing power in the wake of being a key component of Universal's "Furious 7" and its $1.5 billion worldwide gross. He's been front and center in the promotion for "San Andreas," where he plays a heroic helicopter pilot seeking to rescue his daughter, played by Alexandra Daddario, amid the rubble of a mega-quake.
...
"San Andreas," which also stars Carla Gugino and Paul Giamatti, earned an impressive A- CinemaScore from audiences, with 70% coming from the over-25 demo. Dan Fellman, Warner's domestic distribution chief, said Johnson deserves much of the credit.

The movie looks like it's guaranteed to recoup its $110 million production costs.  I'm not so sure that's going to happen to "Tomorrowland" and "Mad Max: Fury Road."

Disney's second frame of George Clooney's "Tomorrowland" finished at a close third with $13.8 million for a $63.2 million 10-day total. The high-priced fantasy, with a $180 million budget, isn't showing much traction with a 58% decline from its opening weekend.

On the foreign front, "Tomorrowland" hasn't dazzled either. It took in $29.3 million from 75 markets, including $13.8 million from its first six days in China, to lift international grosses to $70 million.

On the other hand, the Avengers movie is still doing boffo box office five weeks after it opened.

Disney-Marvel's fifth weekend of "Avengers: Age of Ultron" finished fifth, ahead of "Aloha," with $10.9 million at 3,228 sites, declining 50%. The tentpole has hit $427.1 million -- passing "The Hunger Games: Catching Fire" for the 10th spot on the all-time list of top domestic grossers.

"Ultron" took in $17.6 million overseas to push its international total to $894 million and its worldwide take to $1.32 billion, the sixth highest total of all time.

It looks like this film will be subsidizing "Tomorrowland," in addition to guaranteeing more sequels as far as the eye can see.

Enough of this bonus entertainment entry.  Stay tuned for the monthly meta.