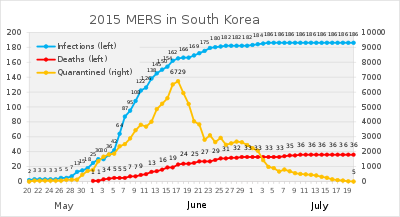 As I have done every summer for the past four years, I'm teaching Biology II (Evolution, Biodiversity, and Ecology).  I began the biodiversity part last week with the origin of life and then launched into viruses yesterday.  Since I know my audience (the class is full of people who want to work in the medical field as doctors, dentists, and veterinarians), I emphasized disease-causing viruses, especially those in the news.  At the end of the lecture, I offered my students a choice between watching a video about either Ebola or MERS as examples of emerging diseases.  They voted for MERS and got this video from DNews added last week: Should You Be Worried About MERS?

There is currently a MERS outbreak in South Korea that has quarantined thousands. What is MERS?

That video was posted on Saturday.  Since then, the number of deaths has doubled.  TomoNewsUS has the story in MERS outbreak in South Korea: 6 dead, 87 infected, 2,300 under quarantine- TomoNews.

SEOUL — Some 2,300 people have been quarantined in South Korea to prevent the further spread of the deadly Middle East Respiratory Syndrome, or MERS, which has already killed six people and infected at least 87.

My students were suitably impressed.  Just the same, Ebola, this isn't.  Instead, MERS acts like a really nasty flu.  That's enough to warrant coverage here, as I followed the 2012-2013 and 2013-2014 flu seasons pretty closely.  Here's to South Korea getting the outbreak under control before it spreads out of the country.
Posted by Pinku-Sensei at 9:53 AM