I left off my examination of cyberwar by America's competitors and adversaries at WXYZ finds local angle on data breach.

I promised reports on cyberwarfare as waged by ISIS AKA The Sith Jihad, China, and Russia in the footnote to National Donut Day 2015.  I took care of the first in Sith Jihad's use of social media a double-edged sword.  Now it's time to see how the junior partner in The CoDominion treats its senior partner.
...
I should also examine American cyber-snooping in the wake of the passing of the USA Freedom Act--after I write about the Russians.

Following my preference for "if it move, it leads," I begin with this story from Wotchit News, Experts Say Russians May Have Posed As ISIS To Hack French TV Channel.

Cybersecurity experts now believe that the attack on France’s TV5Monde, which shut down all television broadcasts for 18 hours, was likely carried out by Russian hackers. According to cybersecurity experts who have examined the attack, the Russian hacker group known as AT28 posing as the ISIS “Cyber Caliphate” were likely behind the hack of France’s TV5Monde television channel.
U.S.-based security firm FireEye observed similarities in the infrastructure used by the Russian group and the one involved in the TV5Monde attack.

I could stop here, as this video closed a circle by tying Russia to The Sith Jihad.  I won't.  Follow over the jump for a story about the largest nest of Agents I've ever read about.

I quoted Flame Warriors at the end of Who's hiding under the bridge of an online science article? 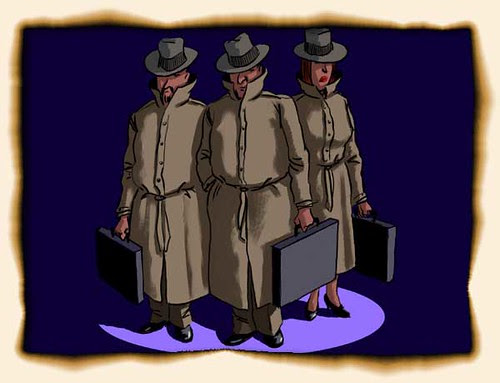 Last week, the New York Times ran a feature story on the largest Agent operation I've ever heard about.*  Appropriately enough, its title is The Agency.

From a nondescript office building in St. Petersburg, Russia, an army of well-paid “trolls” has tried to wreak havoc all around the Internet — and in real-life American communities.
...
The Columbian Chemicals hoax was not some simple prank by a bored sadist. It was a highly coordinated disinformation campaign, involving dozens of fake accounts that posted hundreds of tweets for hours, targeting a list of figures precisely chosen to generate maximum attention. The perpetrators didn’t just doctor screenshots from CNN; they also created fully functional clones of the websites of Louisiana TV stations and newspapers. The YouTube video of the man watching TV had been tailor-made for the project. A Wikipedia page was even created for the Columbian Chemicals disaster, which cited the fake YouTube video. As the virtual assault unfolded, it was complemented by text messages to actual residents in St. Mary Parish. It must have taken a team of programmers and content producers to pull off.

And the hoax was just one in a wave of similar attacks during the second half of last year. On Dec. 13, two months after a handful of Ebola cases in the United States touched off a minor media panic, many of the same Twitter accounts used to spread the Columbian Chemicals hoax began to post about an outbreak of Ebola in Atlanta. The campaign followed the same pattern of fake news reports and videos, this time under the hashtag #EbolaInAtlanta, which briefly trended in Atlanta. Again, the attention to detail was remarkable, suggesting a tremendous amount of effort. A YouTube video showed a team of hazmat-suited medical workers transporting a victim from the airport. Beyoncé’s recent single “7/11” played in the background, an apparent attempt to establish the video’s contemporaneity. A truck in the parking lot sported the logo of the Hartsfield-Jackson Atlanta International Airport.

On the same day as the Ebola hoax, a totally different group of accounts began spreading a rumor that an unarmed black woman had been shot to death by police. They all used the hashtag #shockingmurderinatlanta. Here again, the hoax seemed designed to piggyback on real public anxiety; that summer and fall were marked by protests over the shooting of Michael Brown in Ferguson, Mo. In this case, a blurry video purports to show the shooting, as an onlooker narrates. Watching it, I thought I recognized the voice — it sounded the same as the man watching TV in the Columbian Chemicals video, the one in which ISIS supposedly claims responsibility. The accent was unmistakable, if unplaceable, and in both videos he was making a very strained attempt to sound American. Somehow the result was vaguely Australian.

Who was behind all of this? When I stumbled on it last fall, I had an idea. I was already investigating a shadowy organization in St. Petersburg, Russia, that spreads false information on the Internet. It has gone by a few names, but I will refer to it by its best known: the Internet Research Agency. The agency had become known for employing hundreds of Russians to post pro-Kremlin propaganda online under fake identities, including on Twitter, in order to create the illusion of a massive army of supporters; it has often been called a “troll farm.” The more I investigated this group, the more links I discovered between it and the hoaxes. In April, I went to St. Petersburg to learn more about the agency and its brand of information warfare, which it has aggressively deployed against political opponents at home, Russia’s perceived enemies abroad and, more recently, me.

This is a long read, but a good one; I highly recommend it.  It shows that cyberwarfare doesn't just involve manipulating machines, it also manipulates minds.  Welcome to 21st Century psyops and propaganda.