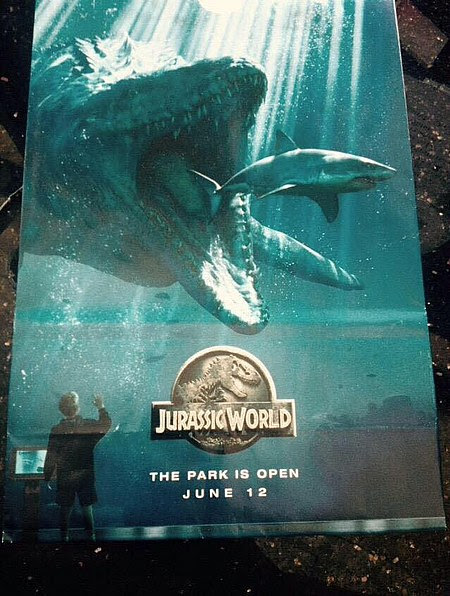 I concluded Presenting the colors for Flag Day by telling my readers "Stay tuned for the Sunday entertainment entry, which will be about how 'Jurassic World' dominated the weekend box office."  Dominate it did, as Variety reported via Reuters in 'Jurassic World' Rumbles to Record Setting $204.6 Million Opening.


Dinosaurs rule the earth again after "Jurassic World" debuted to a dominant $204.6 million at the domestic box office this weekend.
...
Going into the weekend, it was clear that "Jurassic World" was shaping up to be a box office colossus, but no one was even close to predicting the scale of the opening. Most projections were in the $125 million to $135 million range.

Instead, "Jurassic World" scored the year's biggest bow, just ahead of "Avengers: Age of Ultron" and its formidable $191.3 million opening last May. It ranks behind 2012's "Marvel's The Avengers" and its $207.4 million debut on the all-time list of openings. From there, "Jurassic World" stomped across the record books, scoring the third biggest opening day ever, with $82.8 million and shattering all June high-water marks for opening weekend, biggest opening day and all-time biggest PG-13 launch.

That's the the U.S. box office.  Business Insider reported "In China, the four-day total for the film is at $73.6 million."  That's just China.  When the rest of the world was added in, Entertainment Weekly's headlead screamed Jurassic World roars to biggest global opening of all time.


Back in 1993, Jurassic Park became the first film ever to open to more than $50 million. Now, Jurassic World has brought us back to Isla Nublar and broken a few box office records of its own: Chris Pratt and the leaping lizards earned $511.8 million worldwide, becoming the first movie ever to make more than $500 million in a weekend.

Furthermore, Deadline Hollywood shared this bit of gossip: "Some B.O. pundits say that by the time Sunday is called, JW could actually rip Avengers‘ leotards off and become the reigning all-time U.S. opening champ."  I'll check back in a couple of days to see if that comes true.

Back to Variety, which noted an important segment of the box office.


"Jurassic World" was a juggernaut when it came to premium formats. The sequel did 48% of its domestic opening weekend gross on 3D screens, and set an Imax record with a stateside debut of $20.6 million.

All of this makes me optimistic that the upcoming Star Wars movie will do this well when it opens the week before Christmas.

Follow over the jump for how the rest of the major movies performed along with more on "Jurassic World."

Variety listed how the rest of the choices at the cinema fared.


"Jurassic World" sucked up most of the oxygen, leaving a handful of holdover films to forage for crumbs. In second place, Melissa McCarthy's "Spy" showed some staying power, slipping less than 50% to $16 million in its second weekend. The Fox espionage satire has generated $56.9 million in two weeks.

I already dispensed with "San Andreas" and its bad science.  As for "Insidious: Chapter 3," I wrote in Critics' Choice TV Awards winners for speculative fiction, "I don't care enough about modern horror films to bother tracking "Insidious 3," the sole speculative fiction film debuting this weekend, to use up the Sunday entertainment entry on it, although I might post a drink recipe from Tipsy Bartender in honor of the movie in a future entry."  What's worth noting is that both "Tomorrowland" and "Mad Max: Fury Road" have fallen out of the top five.  The latter will make enough money to justify a sequel; the former, not so much.

Speaking of sequels, Chris Pratt Is Signed on for a Jurassic World Sequel.


Pratt, the new face of action movies including Zero Dark Thirty, Guardians of the Galaxy, and potentially a new Indiana Jones reboot has confirmed to Entertainment Weekly that he is officially signed on to a Jurassic World sequel.

Chris Pratt as the new Indiana Jones?  That might just work.  I wonder if he'll team up with Jennifer Lawrence?  Yeah, I wish.

That's enough for tonight.  Stay tuned for an entries marking the start of competitive drum corps season, drink recipes for two of the weekend's top five at the box office, and WXYZ on oil and water.
Posted by Pinku-Sensei at 12:00 AM