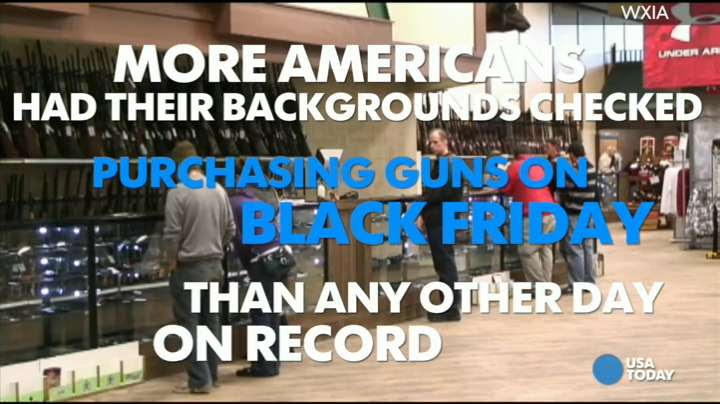 My response to the mass shooting in San Bernardino was to join doctors asking Congress to fund gun violence research at the CDC and NIH.  I even told that message to a local TV station when I was interviewed on the street that day.*  That's not the response that's making news.  WXYZ reports Gun sales spike in metro Detroit.

Gun sales are on the rise in metro Detroit.


More Americans had their backgrounds checked purchasing guns on Black Friday than any day on record, according to data released by the FBI this week.

The National Instant Criminal Background Check System processed 185,345 requests on Nov. 27, one of the largest retail sales days in the country.

Previous spikes for background checks, conducted before a gun buyer can obtain a firearm, occurred after prominent mass shootings, like in December 2012 in the wake of the Sandy Hook Elementary School shooting.

Sure enough, the response to another mass shooting was for Americans to buy more guns.  Follow over the jump for that part of the story.


Worries about personal safety and possible regulatory restrictions are sending gun sales and firearm manufacturers' stock prices up. Analysts say events like the terrorist attacks in Paris and last week's shootings in San Bernardino are prompting Americans — including a growing number of women — to buy more guns.

Shares of Smith & Wesson, who manufactured one of the guns used in Wednesday's attack, are up nearly 6.5 percent today and over $2 in the past week. Shares of firearms manufacturer Sturm, Ruger Company are up 6.7 percent and up nearly $8 since the Paris terror attacks. This is even as Wall Street suffers a poor day overall, down nearly 1 percent.

The market is down and people are scared; buy gun stocks!


"Fear and uncertainty drive spikes in gun sales," Andrea James, vice president and senior research analyst at Dougherty & Company, said via email. "Normal trends combined with the current climate of fear and uncertainty mean that we expect gun sales to be strong through this holiday period and into next year."

It's not just fear driving sales.  The customer base is changing.


Aside from the political climate, IBISWorld said an improving economy and a shift in the demographics of gun owners have benefited the industry. "Women are expected to continue purchasing firearms at higher rates for safety and recreational activities," the company said in a recent report.

The gun industry has tailored its products toward women as the male market has become saturated. Glock markets a line of smaller and slimmer guns toward women. Other makers sells guns splashed in feminine designs. A Las Vegas shooting range called "The Gun Store" hosts bachelorette parties where the guests shoot pink AK-47's.

My friend Nebris, who comments here, will probably like this news.  He's pro-gun ownership and pro-female empowerment.

My reaction to this news is that we definitely will need more research into gun deaths and injuries with more guns and gun owners around.  Here's to keeping up the pressure on behalf of science in the public interest and against those who dismiss most of gun deaths as suicides, which they claim aren't threats to others.  Hey, aren't suicides worth studying?  I think they are.