Music for moving pictures at the 58th Grammy Awards

I concluded Best November ever and other monthly meta with "I have two entries planned, both about awards show nominations."  I may end up having more, so follow along.

For the first post, I repeat the theme of Zombies and Grammys and write about the Grammy nominees honoring music for visual media and visual media about music at the 58th Grammy Awards.  Here are the nominees in these categories from Billboard along with my comments. 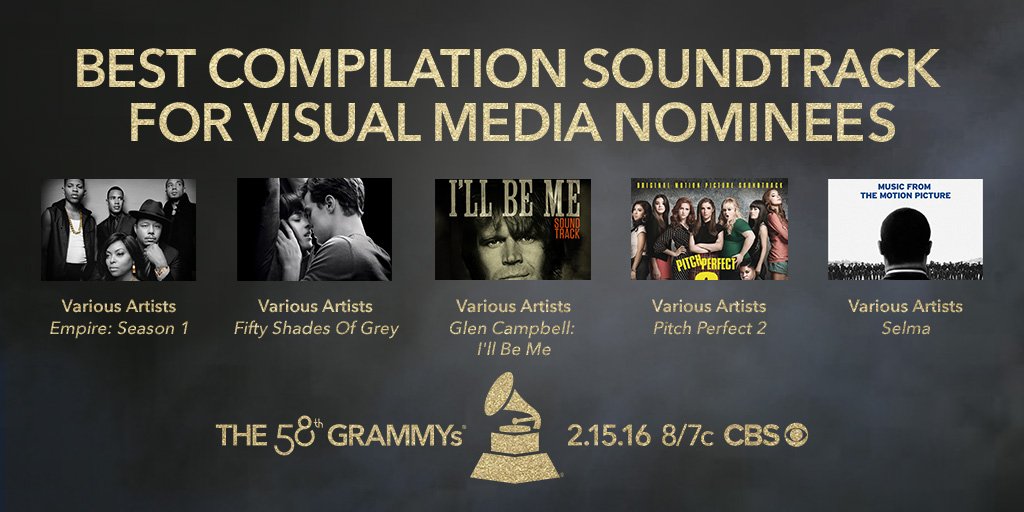 None of these comes from media that fit the primary entertainment theme here of collapse and decline in the context of speculative fiction.  The closest is "Fifty Shades Of Grey," which is glorified "Twilight" fanfiction, making it a derivative of urban fantasy with much more sex and none of the supernatural elements.  Sorry, not good enough, in more ways than one.  I suspect the music is the best thing about the movie, a point I'll return to later.  Instead, I'll have to look at this list from the perspectives of politics and crime.

For politics, I pick "Selma.  It's not about collapse and decline, but about progress through struggle.  I'm OK with that.  I can't be all DOOM all the time, and leavening the bad news with some hope fits the theme of this blog, too.

For crime, I'll stretch and consider "Empire."  That was a big hit at the Teen Choice Awards and got some nominations at the Critics Choice Awards.  The show itself is about the music business, but the previews for this season keep mentioning an FBI investigation, so I'm shoehorning it into crime and injustice.  As for its prospects of winning, I'm not optimistic.  It's the only TV show nominated and movies usually win in these categories.

Speaking of movies, the nominee I'd pick as the favorite would be "Selma" based on the strength of "Glory," which won the award for best song at the Golden Globes and Oscars, it should be the favorite for the hat trick at the Grammys.  That would put it in the same league as "Skyfall," which also pulled off the trifecta.

Follow over the jump for more about the music from "Fifty Shades of Grey" and "Glory," along with other movies.

"Fifty Shades of Grey" got two nominations for a total of three from the Grammy voters.  "Love Me Like You Do" also got a Golden Globe nomination for Best Original Song.  That might help the song at with the movie critics and the Academy members, but it won't propel it to a win here.  It has to contend with "Glory," which has this. Pray for a win at the Golden Globes and a nomination from the Motion Picture Academy, because the songs from "Fifty Shades of Grey" won't overcome this competition.  Instead, have a drink.*

• The Theory Of Everything
Jóhann Jóhannsson, composer
[Back Lot Music]

Other than substituting "Whiplash" for "Gone Girl," this is identical to the soundtrack nominees for last year's Golden Globes.  My favorite is still "Interstellar," but it lost the Golden Globe to Johannson for "The Theory of Everything."  Desplat didn't win the Oscar for "The Imitation Game," instead bringing home the golden statue for "The Grand Budapest Hotel."  I'm not optimistic about Zimmer carrying off the gramophone.  In fact, I wouldn't put it past the Grammy voters to put "Whiplash" in first to honor a movie about musicians the way that the Oscar voters gave "Birdman," a film about actors, the Best Picture honor.  I think that was a mistake, but that's a rant for another time.

*Better yet, here's the recipe: The 50 Shades of Grey Cocktail.

A kinky video for a kinky movie.

Stay tuned for at least one more entry about entertainment, this time about the Golden Globes.
Posted by Pinku-Sensei at 1:14 PM