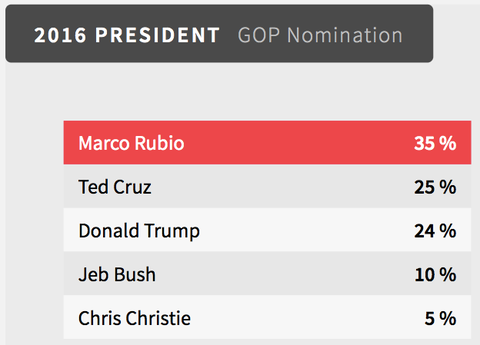 In a footnote to Ben Carson sings "One Wittle Wee Wee," I wrote that "The smart money is still on Rubio to beat Trump."  That started changing a couple of weeks ago, when Rubio's chances fell below 40% and Cruz passed Trump.  A month ago, PredictWise's aggregate of betting markets gave Rubio a 47% chance of winning the nomination.  Trump was second and well behind at 19% with Cruz at 13% and Bush at 10%.  Monday, Paul Krugman included the above chart in Where’s The Rubiomentum?  As of Wednesday, Cruz continued to gain on Rubio, rising to 27% while Rubio remained at 35% and Trump actually dropped a bit to 23%.  Meanwhile, Bush is still stuck at 10% and Christie has replaced Carson in the top five, improving to 5%.

Krugman expressed his skepticism of Rubio's odds, writing "I’m not a huge believer in prediction markets, which seem more to reflect conventional wisdom than to offer profound insights."*  Just the same, he mentioned that "it’s noteworthy that they are less and less convinced that Rubio is really a front-runner, and now take both Trump and Cruz seriously."  I saw that last month as well and I opined that it's not a good thing.

The bettors may be losing confidence in Rubio, but elected Republican officials aren't.  During the most recent debate, FiveThirtyEight posted this graph showing how many endorsements GOP candidates had earned by debate time.

Rubio has earned even more since then and is within 10 points of Bush.  Meanwhile, Ted Cruz has only been inching up.  The people making wagers may think that Rubio is losing steam, but the party establishment is still boarding the Rubio bandwagon faster than any other candidate.  If one is a fan of "The Party Decides," like the writers at FiveThirtyEight, then this is a good thing for Marco Rubio.  Of course, the party may decide on Cruz.  If so, Krugman is looking forward to the outcome.  As he wrote, "it will be fun watching supposedly moderate Republicans explain why Trump or Cruz are, in the end, better than Hillary."

*Krugman's comment mirrors what Infidel 753 wrote in a response to a comment of mine at his blog.

I don't have the slightest interest in online betting markets on elections. The fact that people are willing to put up money based on their opinions doesn't mean they have any more knowledge or expertise than anyone else -- only that they're probably as dumb as most gamblers are.

I have more confidence in the usefulness of prediction markets, but that's because of my experience with the Iowa Electronic Market, which goes back to 1992.  I've found it very reliable.
Posted by Pinku-Sensei at 8:57 AM