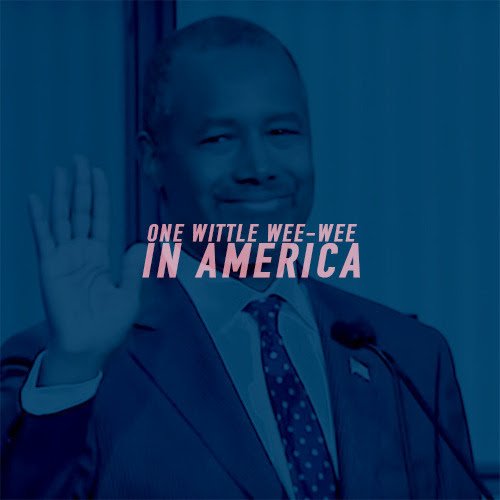 The scrutiny of Ben Carson that included my razzing him in Doctor Carson and his Amazing Technicolor Labcoat looks likes it's taking its toll, as Politico reported Wednesday Ben Carson tumbles in national poll.  That survey had him tied for third place with Ted Cruz behind Donald Trump in first and Marco Rubio in second.*  Looks like the next Examiner.com article on Carson's polls won't show him leading Clinton and Sanders in Michigan.

It also means that jokes about the candidate, other than ones about his leaving the nomination contest, are approaching their sell by dates.  Since my wife found a good one, I'd better share it before it goes bad.  So in the spirit of Donald Trump dance remix, I present One Wittle Wee-Wee In America (Ben Carson).

One of the greatest Presidential Campaign songs of all time. Dr Ben Carson (Neurosurgeon) and his contribution "One Wittle Wee-Wee". For 'murica.

If you like this, please check out "Bad Lip Reading" on YouTube. This is a snippet from their original video, with some extra patriotism thrown in for my own entertainment.

Here's the full video, in which Doctor Pyramid gets the last song: "FIRST REPUBLICAN DEBATE HIGHLIGHTS: 2015" — A Bad Lip Reading of The Republican Debate.


If only these candidates were this funny in real life.

*The smart money is still on Rubio to beat Trump.
Posted by Pinku-Sensei at 9:29 AM