Continuing on in the spirit of Darth Trump, I present the following from Ipsos-Reuters: Ipsos Calls 2016 Election for Obi Wan Kenobi.

Washington, DC – In a new poll pitting characters from the Star Wars franchise against actual presidential candidates, Ipsos finds that the American public would prefer to elect the iconic Jedi Obi Wan Kenobi than any other challenger. Outside of the political realm, the Ipsos poll established that America’s favorite Star Wars character is Luke Skywalker, who captured 21% of respondents, followed closely by Han Solo, Yoda and Obi Wan Kenobi. The remainder of the poll pitted main Star Wars characters in hypothetical matchups with the frontrunners in the actual Presidential race, yielding some surprising results.

"Whether it's because of this week's release of Episode 7, or general disdain among Americans with their political system, this data suggests that the Jedi Order is vastly more popular than either the Republican or Democratic Party,” said Chris Jackson, Vice President at Ipsos Public Affairs. “As we have seen in much of the political data this year, our Republic is more fractured than in recent history. However, it seems that the force could ‘surround us and bind the universe together’.”

Other key highlights from the data:
Luckily for the Presidential hopefuls, Star Wars took place a long time ago, in a galaxy far, far away and none of the characters meet the Constitutional requirement of being born in the United States of America, potentially highlighting a weakness in the “birther” argument.

Here are Trump's head-to-head numbers in graphic form, courtesy of The Daily Mail. 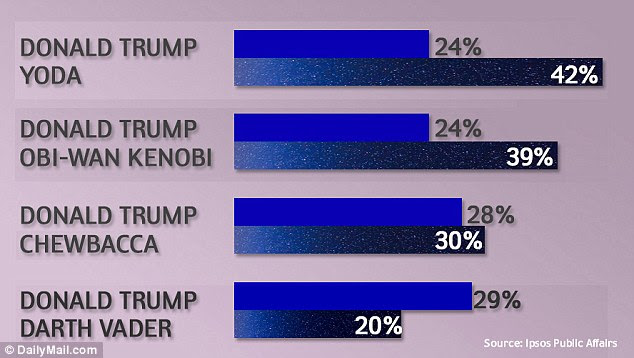 At least Hillary Clinton can beat the Dark Lord of the Sith, even if she can't best the remaining members of the Jedi Order. 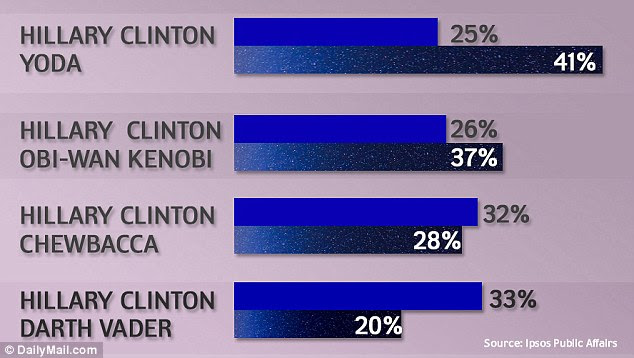 May The Force be with you.
Posted by Pinku-Sensei at 9:03 AM