Another debate, another dropout from the GOP contest--that's been the pattern so far and it held after last week's debate with the suspension of Lindsey Graham's campaign yesterday.  CNN has the story in Lindsey Graham quits; GOP establishment wonders who's next.

"We're going to have to start consolidating as Republicans," he said in an exclusive interview with CNN's Kate Bolduan on his decision to leave the 2016 GOP presidential nominating race.

Graham's parting plea echoes what prominent Republicans and conservatives have been saying for months as Trump's dominance and that of other outsiders have left the GOP establishment rattled and split among several candidates.

That may be the sane reaction, but it's not what's happening, as Wochit shows in GOP Candidates Vie For Lindsey Graham Supporters.

Lindsey Graham's withdrawal from the race for Republican presidential nominee is only hours old, but his former rivals are already jockeying to pick up the support of the South Carolina senator. Graham's endorsement is strategically important due to the early timing of the South Carolina primary, the first in the Republican-dominated South. Graham, who told CNN on Monday that he has "no intention of endorsing anyone right now," has already seen the various campaigns lining up to heap praise upon him: from Marco Rubio, Chris Christie, to Jeb Bush, all now seeking the backing of Graham and his supporters.

Graham's supporters may be useful in South Carolina for endorsements and money, but as far as making a difference in actual voters, I'll let this graphic from P.M. Carpenter show how much that will really mean. 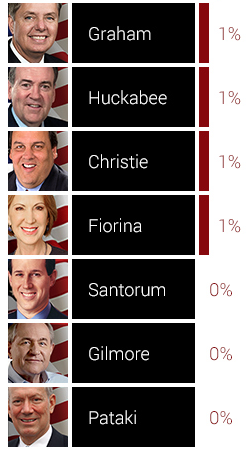 Good luck going after that one percent, Establishment candidates.  They might get one of you into third place.