Michigan has the cheapest gas in the U.S. 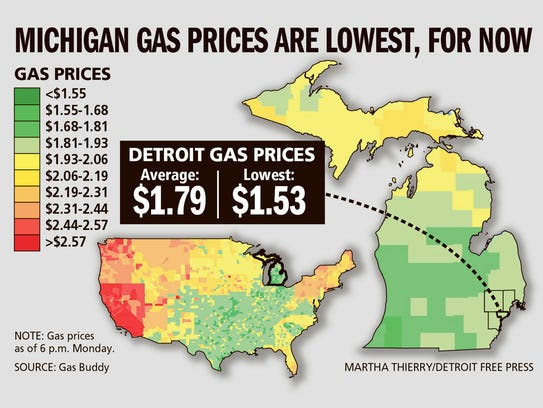 I concluded Regular falls below $2.00 in metro Detroit before Thanksgiving as predicted by forecasting that gas would fall to $1.75 by Christmas, either as the average price in my old neighborhood as as the Detroit average from GasBuddy.  The first happened this weekend as the price in my old neighborhood was $1.69 at all three stations on Tuesday.  The second nearly happened, as the average was $1.79 Tuesday morning and is $1.78 now.  I'll claim credit for being right 23 days early.

Prices were even lower in other parts of the state, as WOOD-TV reported in GasBuddy: Michigan’s gas cheapest in U.S.

Michigan’s gas prices dipped Sunday to become the lowest in the country — but it won’t be long until they go back up.

The Detroit Free Press explains why the price has fallen.

Reasons for the cheap gas include: Crude oil prices have been low compared to previous years as inventories build. Russia and Saudi Arabia continue to produce oil, while China's economic growth has been slower than projected, and domestic inventories are nearing record levels.

In addition, Midwest refinery production has recovered, improving supply and prices; and financial markets have been resilient despite terrorist attacks in Paris.

Oil-Price.Net shows futures prices for oil and wholesale prices for gasoline are all up from last month, when WTI was at $40.75, Brent was at $44.14, and RBOB is selling for $1.27.  WTI closed yesterday at $41.85, Brent at $44.44, and RBOB at $1.36.  These are still very low prices and can support Patrick DeHaan of GasBuddy's prediction of low prices through the winter.

"I think prices should spend more time under $2 than over $2 through Valentine's Day," he said. "Once the sweetness of that milk chocolate and all those roses dies down, then we'll be talking about higher gas prices -- and that's just going to be the seasonal change."

Limbo Kitty might be getting quite a workout this winter.
Posted by Pinku-Sensei at 12:00 AM