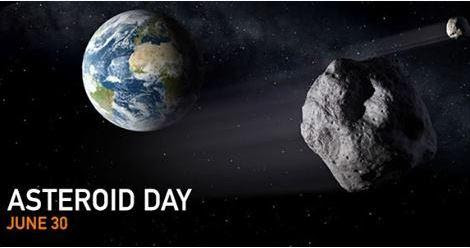 I concluded Monthly meta for May 2016 with the following program note.

Stay tuned for the final post of the month, which should be about Asteroid Day the more widely recognized, if more more recently inaugurated, version of Apophis Day.

That's today.  Here's what Wikipedia says about the day.

Asteroid Day is an annual global awareness movement that brings people from around the world together to learn about asteroids and what we can do to protect our planet, our families, communities, and future generations. Asteroid Day is held on the anniversary of the June 30, 1908 Siberian Tunguska event, the largest asteroid impact on Earth in recent history.

That's what I have been hoping my observance of Apophis Day would do since 2012, when I declared April 13th to be Apophis Day, the date of two future close encounters of the asteroid Apophis with Earth, the second of which was originally forecast as a possible collision.  However, I'm not Brian May, astrophysicist and guitarist for Queen, so I don't have the connections or star power to get that day go viral like he does.  Oh, well.  What's important is that the message gets out, and Queen and his fellow scientists and celebrities are doing just that.

Speaking of scientists and celebrities getting the message out, Neil DeGrasse Tyson, a celebrity scientist narrates Scientists Rock - an Asteroid Day series | Episode 1, which I'm sharing to celebrate this year's Asteroid Day.

Episode 1: Launching Asteroid Day introduces us to the people and vision behind Asteroid Day, a growing global awareness movement where people from around the world are coming together to learn about asteroids, the hazards they may pose, and how we can do to protect our planet, families, communities, and future generations.

Click here to watch the playlist with all seven episodes.