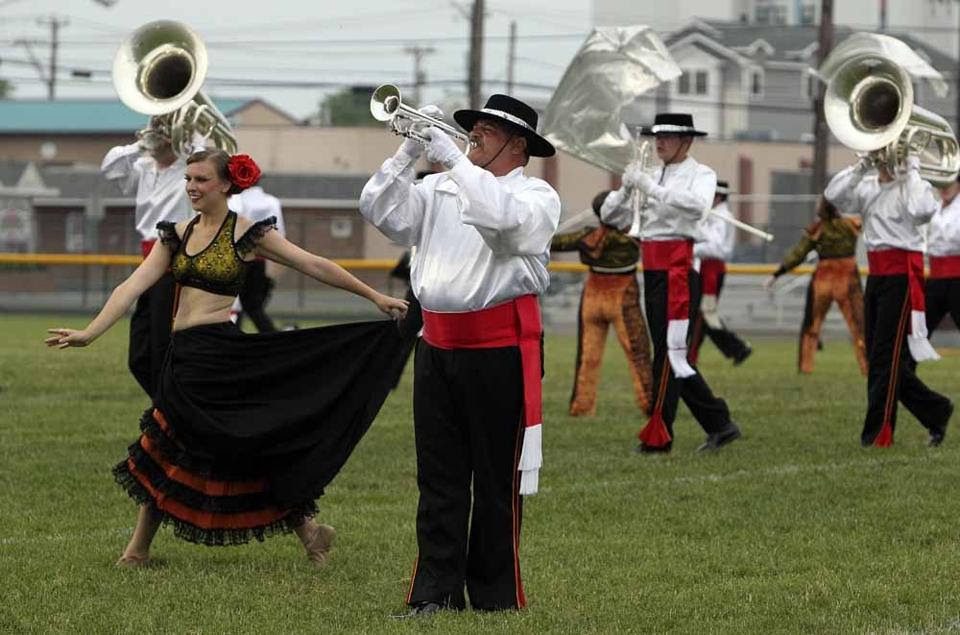 I concluded Drum corps for the Oregon primary by telling my readers "The big finale will come on June 7, when I feature corps from California and New Jersey, two great drum corps states."  That's today!

I begin with the political forecast.  FiveThirtyEight has predictions for both California and New Jersey.  Both show Hillary Clinton likely to win, in California with a 90% chance according to the polls-plus and 86% chance according to the polls-only, while she has more than a 99% chance of winning New Jersey.  Even without the Associated Press announcing yesterday that Clinton has enough delegates to win the nomination, I expected that today would be Bernie Sanders' last stand.  Just the same, he has a chance to go out on a high note with at least one victory tonight, as Montana and South Dakota, two likely Sanders states, and New Mexico, a likely Clinton state, also vote today.  He could go on a very high note if he upsets Clinton in California.  Whatever the outcome, this Sanders supporter is now ready for Hillary.

Enough analysis.  It's time for the drum corps to entertain my readers while they are waiting for the election returns.  In this first installment, I feature the corps from New Jersey, beginning with the Hawthorne Caballeros - 6.20.15 Wildwood, NJ.


I'm not done with the Cabs.  Here is the previous year's performance at the DCA championships: Hawthorne Caballeros 2014 Finals (Quality Audio).


Follow over the jump for more New Jersey corps.

Another New Jersey corps made DCA Finals last year.  Here is the performance that put them there:  Fusion Core 2015: DCA Prelims.

This is a video of Fusion Drum and Bugle Core performing in Rochester at Sahlen's Stadium on Septermber 5th, 2015 for DCA Prelims. "All Aboard"


In case the above gets taken down, here's an official clip of 2014 Jersey Surf - Pay it Forward: The Gift of Giving.


Finally, here's a blast from the past, the Bayonne Bridgemen - Rochester 2015


I'll see if I can put together a post featuring California corps for tonight.  In the meantime, enjoy the drum corps!

ETA: I forgot the Raiders.

ETA 2: A commenter noted that I had also neglected to include the Hawthorne Caballeros Alumni.  Here they are!