All Hell breaks loose after the U.K. votes to leave the E.U. 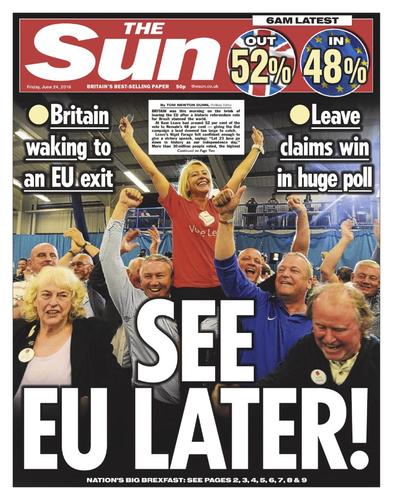 In Brexit vote today, I hoped that the British voted to remain.  They didn't.  As Krugman phrased it, they had a choice between bad and worse and they chose worse.  Two of the headlines from Reuters I read when I woke up this morning explain the reaction.

First, 'Explosive shock' as Britain votes to leave EU, Cameron quits, which is the number one story on the site right now.


Britain voted to leave the European Union, forcing the resignation of Prime Minister David Cameron and dealing the biggest blow to the European project of greater unity since World War Two.

Global financial markets plunged on Friday as results from a referendum showed a 52-48 percent victory for the campaign to leave a bloc Britain joined more than 40 years ago.

The pound fell as much as 10 percent against the dollar to touch levels last seen in 1985, on fears the decision could hit investment in the world's fifth-largest economy, threaten London's role as a global financial capital and usher in months of political uncertainty. The euro slid 3 percent.

Reuters has a strong financial slant to its coverage, which explains the third paragraph.  It also explains the headline to the next story, which is currently the third most read there: World stocks routed as Britain votes for EU exit.


World stocks saw more than $2 trillion wiped off their value on Friday as Britain's vote to leave the European Union triggered 5-10 percent falls across Europe's biggest bourses and a record plunge for sterling.

Such a body blow to global confidence could prevent the Federal Reserve from raising interest rates as planned this year, and might even provoke a new round of emergency policy easing from all the major central banks.

Risk assets were scorched as investors fled to the traditional safe-harbors of top-rated government debt, Japanese yen and gold.

Almost $1 trillion had been lost from European share prices ahead of what is expected to be a nearly 4 percent fall on Wall Street ESc1 when it opens later.

Worries that other EU states could hold their own referendums were compounded by the fact that markets had rallied on Thursday, seemingly convinced the UK would vote to stay in.


U.S. stocks plunged at the open on Friday, with the Dow Jones average falling more than 500 points, after Britain's vote to quit the European Union delivered the biggest blow to the global financial system since the 2008 financial crisis.

Investors worried about the outlook for the world economy sought refuge in the dollar and other safe-harbor assets such as gold and U.S. Treasury bonds, while dumping riskier shares. The yield on the U.S. 10-year bond hit its lowest since 2012.

Banks and tech stocks were among the biggest losers.

All the above is just the financial fallout.  Follow over the jump for the political responses.

The second half of the first Reuters headline read Cameron quits.


An emotional Cameron, who led the "Remain" campaign to defeat, losing the gamble he took when he called the referendum three years ago, said he would leave office by October.

"The British people have made the very clear decision to take a different path and as such I think the country requires fresh leadership to take it in this direction," he said in a televised address outside his residence.

"I do not think it would be right for me to be the captain that steers our country to its next destination," he added, choking back tears before walking back through 10 Downing Street's black door with his arm around his wife Samantha.

So who will be the next Prime Minister?


His Conservative Party rival Boris Johnson, the former London mayor who became the most recognizable face of the Leave camp, is now widely tipped to seek his job.

Johnson left his home to jeers from a crowd in the mainly pro-EU capital. He spoke to reporters at Leave campaign headquarters, taking no questions on his personal ambitions.

"We can find our voice in the world again, a voice that is commensurate with the fifth-biggest economy on Earth," he said.

That's not all, as this vote may lead to the United Kingdom not being united any more.


The United Kingdom itself could now break apart, with the leader of Scotland - where nearly two-thirds of voters wanted to stay in the EU - saying a new referendum on independence from the rest of Britain was "highly likely".

In addition, Northern Ireland, which voted to remain, might actually join the Republic of Ireland.  That would be historic, as a united independent Ireland has not existed since the days of the High Kings, which ended with the Norman Invasion in 1168.  If that happens, it will be good news, but it will be a long time coming.  In the short term, the only good news out of all this is that oil will become cheaper.  When the dollar rises, oil nearly always falls.  I'll cover that in tomorrow's entry.
Posted by Pinku-Sensei at 10:55 AM