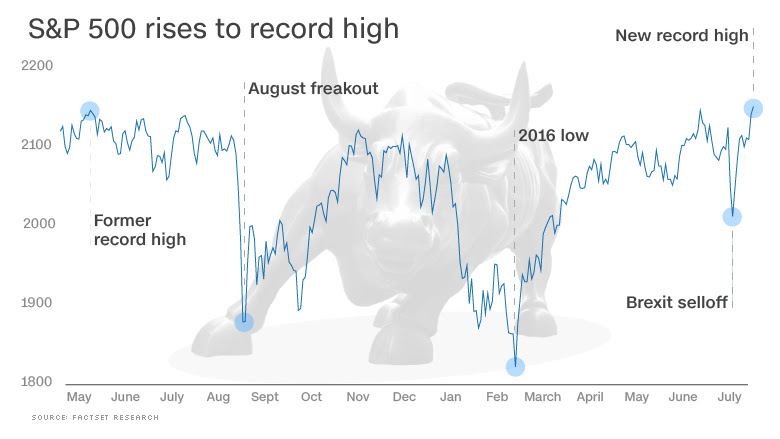 I concluded the section before the jump in All Hell breaks loose after the U.K. votes to leave the E.U. with this caveat.

That didn't happen.  Instead, this did: Red-hot Dow rises for 9th day in a row.

The stock market is so hot that the Dow just notched a rare nine-day winning streak.

It's only the seventh time since 1980 that the benchmark index has climbed that many days in a row, according to the New York Stock Exchange.

More impressive, the Dow continues to rewrite the record books, closing on Wednesday at yet another fresh all-time high of 18,595.

It's the latest milestone in what has been a wild summer for stocks. Global markets plunged on June 24 after the Brexit referendum in the U.K. spooked investors. But stocks soon raced back emphatically, and just kept rising until they took out the records set in May 2015.

Wall Street rose on Friday, with the S&P 500 index hitting a record intraday high for the seventh time this month as gains in technology heavyweights Alphabet and Amazon more than made up for losses in energy shares.

The benchmark index rose as much as 0.3 percent, touching an all-time high of 2,177.09, and completed its fifth straight month of gains.

So, will Mike and I end up being wrong?  Not yet.  Follow over the jump for why.

No less an economic expert than Paul Krugman examined the problems with the stock market in Bull market blues, orginally published in the New York Times and republished in the Press Democrat.

The fact that the major averages have lately been hitting new highs — the Dow has risen 177 percent from its low point in March 2009 — is newsworthy and noteworthy. What are those Wall Street indexes telling us?

The answer, I’d suggest, isn’t entirely positive. In fact, in some ways the stock market’s gains reflect economic weaknesses, not strengths. And understanding how that works may help us make sense of the troubling state our economy is in.
...
The truth, in any case, is that there are three big points of slippage between stock prices and the success of the economy in general. First, stock prices reflect profits, not overall incomes. Second, they also reflect the availability of other investment opportunities — or the lack thereof. Finally, the relationship between stock prices and real investment that expands the economy’s capacity has gotten very tenuous.

What Art Hogan told CNN Money reflects on that second point: "Low yields are driving money into stocks. There is no other place to go. There is no alternative."  A variation on that theme appeared in the Reuters report, which also touches on Krugman's first point.

U.S. gross domestic product in the second quarter grew at a 1.2 percent rate, coming in below expectations for a rise of 2.6 percent and fueling arguments the Federal Reserve may not need to raise U.S. interest rates anytime soon.

Profits are up, but overall income not so much.*  Krugman explains why.

If the private sector doesn’t see itself as having a lot of good investment opportunities, how can profits be so high? The answer, I’d suggest, is that these days profits often seem to bear little relationship to investment in new capacity. Instead, profits come from some kind of market power — brand position, the advantages of an established network, or good old-fashioned monopoly. And companies making profits from such power can simultaneously have high stock prices and little reason to spend.

Consider the fact that the three most valuable companies in America are Apple, Google and Microsoft. None of the three spends large sums on bricks and mortar. In fact, all three are sitting on huge reserves of cash. When interest rates go down, they don’t have much incentive to spend more on expanding their businesses; they just keep raking in earnings, and the public becomes willing to pay more for a piece of those earnings.

In other words, while record stock prices do put the lie to claims that the Obama administration has been anti-business, they’re not evidence of a healthy economy. If anything, they’re a sign of an economy with too few opportunities for productive investment and too much monopoly power.

So when you read headlines about stock prices, remember: What’s good for the Dow isn’t necessarily good for America, or vice versa.

I figured out Krugman's conclusion decades ago, when I watched news that a company was laying off workers coupled with its stock price rising.  That a company was in bad enough shape to lay people off should be a bad sign, but investors thought it would result in higher profits.  That made me a bit cynical about Wall Street.  Keep that thought in mind while reading any post of mine about stock prices.

As for the recession prediction, I'm still forecasting the beginning of a recession the U.S. by the end of 2017.  I think the current rally will be the last one of the post-financial crisis bull market and that Mike's prediction of Dow 8,000 by the end of 2018 is still good.  Look for a repeat of the 2000-2002 stock market slide and 2001 recession, just 16 years later.

*I do have one bit of good economic news from Morningstar that I'll use as part of a report on oil and gasoline prices later this week.  Stay tuned.