Oil falls to 12-year lows, dragging stocks down with it 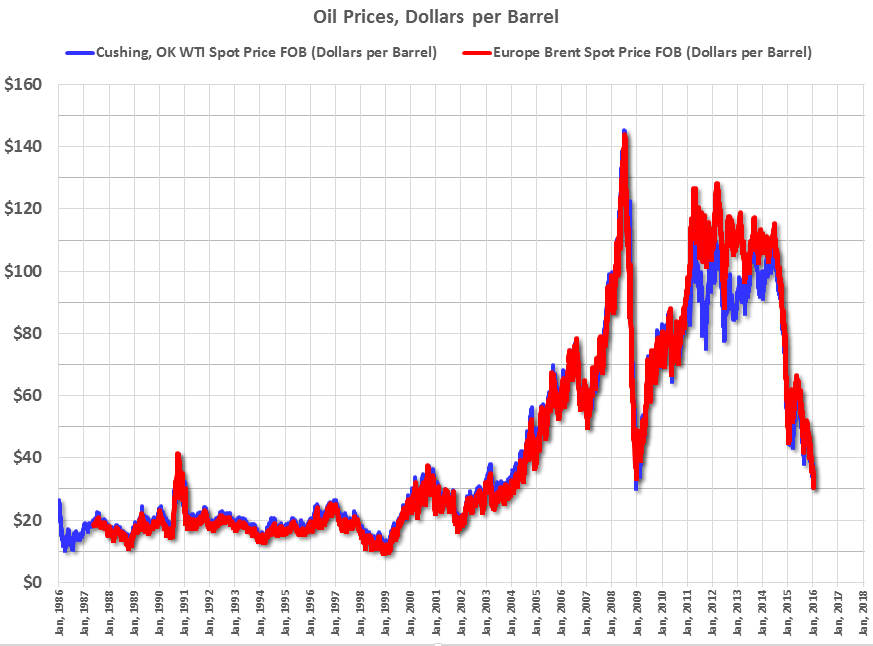 I bragged about a forecast that came true in Michigan has the cheapest gas in the U.S.

I opened Regular falls below $2.00 in metro Detroit before Thanksgiving as predicted by forecasting that gas would fall to $1.75 by Christmas, either as the average price in my old neighborhood as as the Detroit average from GasBuddy.  The first happened this weekend as the price in my old neighborhood was $1.69 at all three stations on Tuesday.  The second nearly happened, as the average was $1.79 Tuesday morning and is $1.78 now.  I'll claim credit for being right 23 days early.

I ended with a weak prediction that "Limbo Kitty might be getting quite a workout this winter."  So far, that hasn't happened, at least for gasoline, as the cheapest I've seen the stations in my old neighborhood since was $1.73 on Tuesday when I filled up Pearl, and the Detroit average never quite hit $1.75.  Oil prices, however, have been another story, as Reuters reported yesterday morning in Oil's slide below $30 sends shockwaves far and wide.

U.S. oil stumbled below $30 for the first time in 12 years to levels that threaten the survival of many U.S. shale firms, spur more belt-tightening by oil majors and spell more pain for crude-producing nations and regions.

A seven-day losing streak fueled by concerns about a continued supply glut and fragile demand from China, the world's No. 2 consumer, wiped out almost a fifth of crude prices this year and 70 percent since mid-2014.

Traders have all but given up attempting to predict where the new-year rout will end, with momentum-driven dealing and overwhelmingly bearish sentiment engulfing the market. Some analysts warned of $20 a barrel; Standard Chartered said fund selling may not relent until it reaches $10.

$10-$20 oil?  That's the range in which the investment strategy of Mike Alexander's that I mocked in the footnote to Two years on, the stock markets are still setting records will work.

In 2003, he thought oil would return to 1998 levels within a decade and devised an investment scheme based on that prediction.  I told him that would never happen and that he shouldn't include that in his next book.  His response was that it only had to work once.  I told it would only work once if he was lucky.  After a dozen years, I'm still right; oil prices never dropped that low again.

It might just happen in the next year.  If so, I can still say I was right.*

Enough bragging.  How low did oil go on Tuesday?

The U.S. West Texas Intermediate crude (WTI) benchmark briefly touched a low of $29.93, which was last seen in December 2003.

Yowza!  I never thought I'd see prices that low again, not unless the U.S. was in a deep recession, which were aren't--yet.

What about Wednesday?  Follow over the jump for yesterday's closes.

The headline at Reuters tells about continuing carnage in the oil markets: Brent hits near 12-year low as market wrestles with weak demand.

Brent crude ended 2 percent lower on Wednesday after falling below $30 a barrel for the first time since April 2004 as a growing stocks of oil in the United States stoked market fears about demand.

Both Brent and U.S. crude futures saw highs early in the day of more than $1 above Tuesday's closing price on upbeat Chinese economic data earlier in the session.

But U.S. government data showing builds in crude, gasoline and diesel supplies augmented fears that demand will stagnate as global markets contend with oversupply.
...
Brent fell to a new 12-year low at $29.96 a barrel before settling at $30.31 a barrel, down 55 cents or 1.8 percent.

So both futures closed above $30.  That's an important psychological level, but still very low.  The oil companies are losers in this environment, and so are their employees.  In his 2016 forecast, Kunstler wrote “The landscape of North Dakota is littered with unfinished garden apartment complexes that may never be completed, and the discharged construction carpenters and roofers drove back to Minnesota ahead of the re-po men coming for their Ford F-110s. Sad, I know…”**  My response, which I also posted at Greer's 2016 forecast, was that their misfortune was going to be even more ignored that he thought.

The plight of the oil workers and those dependent on them isn’t getting much attention. In fact, it’s going to get less attention, if only in fiction. The TV series “Blood and Oil” was supposed to be a 21st Century version of “Dallas” and “Dynasty” set in North Dakota during the shale boom. The show went ten episodes and is likely to be cancelled.  People switched over from the fractured fairy tales of "Once Upon A Time" to the zombie apocalypse of "The Walking Dead" then back to the national security theater of "Quantico," which is "Homeland" meets "How To Get Away With Murder." Viewers would rather watch Rick Grimes kill zombies than a soap opera about oilmen and their women

Just the same, there are some winners.

Cheap gasoline and low heating costs have produced a windfall for the majority of U.S. consumers, which with a delay begins to show up in discretionary spending and savings.

The U.S. auto industry is also racking up record sales and profits, largely due to the resurgent popularity of trucks and sport utility vehicles fueled by gasoline prices at multiyear lows.

Enjoy it while it lasts, as low oil prices are a symptom, not a cause, of a weak global economy, one which is sending shock waves through the stock markets even as the domestic consumer economy is doing well.  Reuters has that story, too, in U.S. shares tumble; Brent crude slips below $30.

U.S. stocks tumbled on Wednesday to their lowest close since September and oil prices gave up an early rally on mounting worries about the global economy.

Major U.S. stock indexes finished down more than 2 percent, with the Nasdaq off more than 3 percent. The S&P 500 ended a two-day rebound, closing below 1,900 for the first time since September.

"There is a fear that the global economy and the U.S. economy as well could lapse into a recession given the fall in energy prices and greater economic weakness overseas," said Tim Ghriskey, chief investment officer of Solaris Asset Management in New York.
...
Benchmark 10-year U.S. Treasury note yields fell to their lowest levels since late October as investors piled into safe-haven government debt.

It's likely to get worse.  Mike Alexander posted his most recent update last June: 10000 point decline in the Dow in the cards over the next three years.  At the time, the DJIA had just hit a record close of 18,312.39 on May 19, 2015.  Since then, the market has already passed the 10% drop for a correction.  If it goes down another 10% to below 14,650, that will signal a bear market, which means we are on track for another recession within a year.  After that, if Mike is right, it's down to the 8,000s by the end of 2018.  The recession beginning late this year or early next looks like it will arrive right on schedule.

*Mike learned from that experience and posted about in Oil Prices, the Kondratiev Cycle and Peak Oil.  One of these days I'll get around to examining that here.