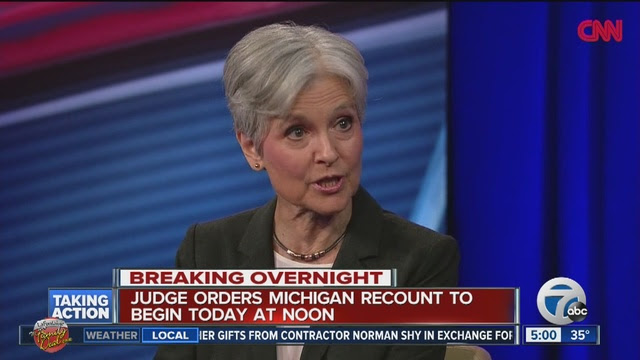 When I promised that I would return to reality today, I didn't expect this news on the Michigan recount happening over the weekend: Decision pending on Michigan election recount from WXYZ.


The result of that hearing was Judge orders immediate start of Michigan recount from the Detroit Free Press via USA Today.

A federal judge early Monday morning ordered a recount of Michigan's presidential ballots to begin at noon on Monday, and for the state to "assemble necessary staff to work sufficient hours" to complete the recount by a Dec. 13 federal deadline.

Goldsmith said a state law requiring a two-business-day waiting period to start the recount probably violates voting rights. Stein has shown "a credible threat that the recount, if delayed, would not be completed" by Dec. 13 — the federal "safe harbor" deadline to guarantee Michigan's electoral votes are counted when the electoral college meets Dec. 19.

"With the perceived integrity of the presidential election as it was conducted in Michigan at stake, concerns with cost pale in comparison," Goldsmith said in his opinion.

In ordering the recount to begin at noon Monday, rather than Wednesday morning under the two-day waiting period the state planned to observe, Goldsmith ordered the recount, once started, "must continue until further order of this court."

I have two reactions to this news.  First, it makes me more optimistic that Stein moving her legal efforts in the Pennsylvania recount to federal court might work.  Newsy reports on this part of the story.

The campaign said the state court system is "ill-equipped to address this problem."

Second, I'd normally post Professor Farnsworth, but I think that would be premature.  Instead, I'm going to echo Dame Shirley Bassey covering Pink, "Get This Party Started!"


I'll keep my readers updated on the progress of the recounts.
Posted by Pinku-Sensei at 9:11 AM