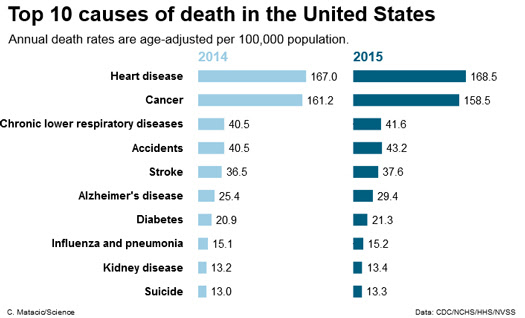 On the collapse and decline beat in the real world, Al Jazeera English reports US life expectancy declines for first time in two decades.

The average life expectancy in the United States has fallen for the first time in more than two decades.

Researchers blame the drop on a rise in preventable diseases.

Vox noted that the increased rates of death resulting in lower life expectancy are not the result of one cause in one part of the country.


What complicates the overarching narrative of despair — that a lack of economic prospects is leading people to self-harm and substance abuse — is that it simply can’t apply to the whole country. Different geographic regions are experiencing extreme variations in despair-related outcomes like suicides, drug overdoses, and heart disease, said Abraham Flaxman of the University of Washington, one of the authors of the new JAMA paper.

"If you look at geographic patterns, you can say it’s despair that’s leading people to drink and do drugs. But then why wouldn’t that apply to leading people to overeat and become obese and diabetic? These trends are happening in different places."

To be more specific, today’s cardiovascular disease problems (which are linked to nutrition and obesity) largely plague the South, while the substance abuse and mental health issues are more concentrated in Appalachia, and the rise in self-harm and interpersonal violence is happening in the Southwestern part of the country.


“I think we should be very concerned,” Case told Lenny Bernstein of the Washington Post. “This is singular. This doesn’t happen.” When Case and Deaton released their finding, they argued that it was largely attributable to disturbing upticks in various forms of addiction — opioids, most importantly — as well as suicide. The new statistics get more granular, and they suggest the misery is well-dispersed: There were increases in just about every major cause of death between 2014 and 2015, and the death-rate increases centered on whites and black men — they remained flat for Latinos and for black women. People are dying for a lot of reasons, but drugs stand out as a particularly devastating part of the problem: In fact, one key to the racial divide may also come from numbers released yesterday, these from the CDC: For the first time ever, more people died from heroin overdoses than from gun homicides in 2015.

Eep!  That's an alarming statistic on a topic I haven't blogged about here.  No wonder opioid addiction has been a big topic in the news!  On the other hand, it reinforces a point I've been making off and on all year, that it was not likely that gun deaths would pass traffic deaths in the U.S. last year.  Now I'm even less sure that will happen as long as Americans continue to increase the miles they drive and other causes of death are gaining on those from firearms.  As seen on the graph at the top, accidents of all kinds, including both traffic deaths and overdoses, are now the third leading cause of death for all Americans.


We don’t know how bad the United States’ burgeoning mortality crisis is going to get. Russia provides a disturbing worst-case scenario. “Sometime in 1993, after several trips to Russia, I noticed something bizarre and disturbing: people kept dying,” wrote Masha Gessen in New York Review of Books in 2014. “I was used to losing friends to AIDS in the United States, but this was different. People in Russia were dying suddenly and violently, and their own friends and colleagues did not find these deaths shocking.” She went on to explain that “In the seventeen years between 1992 and 2009, the Russian population declined by almost seven million people, or nearly 5 percent — a rate of loss unheard of in Europe since World War II. Moreover, much of this appears to be caused by rising mortality,” with alcohol a prime culprit. This is what happens when the insides of a developed country begin to rot.

The United States isn’t Russia. Probably. But wherever this trend goes, what we’re seeing is the end result of decades of slow-burn economic decline and decay, with no end in sight. You can only make it hard for people to work and pay rent and buy necessities and live so long, you can only have them living right on the brink of bad-break ruin for so long, before there will be serious consequences. And we’re seeing those serious consequences in every new set of shocking mortality statistics.

I mention the Russian experience after the fall of the Soviet Union in class regularly as an example of how government and civilization work to increase and maintain carrying capacity and how their decline and fall causes carrying capacity to fall, increasing mortality dramatically.  It's right up there with the fall of Rome.  I hope I don't have to use the U.S. as an example as well.

Enough DOOM from the real world.  Stay tuned for a weekend of entertainment entries concentrating on awards shows and Star Wars!
Posted by Pinku-Sensei at 1:43 PM