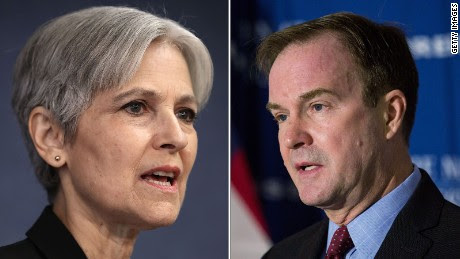 
Trump and the Republican Party have objected. Let's see if they prevail, in which case my optimism was premature.

WXYZ had the first word on this part of the story in Trump objects to Michigan recount.


Michigan's Board of State Canvassers deadlocked 2-2, along party lines, Friday, on President-elect Donald Trump's objection to Green Party candidate Jill Stein's request for a recount of all presidential ballots cast in Michigan.

State election officials said earlier that a tie vote would mean a hand recount of all of the roughly 4.8 million ballots would proceed. But lawyers for Trump have asked the board for a stay of its decision, and the board has not ruled on that request. The board was also still deliberating Friday on whether a hand recount should be conducted, as requested by Stein, or a machine recount, recommended by Secretary of State Ruth Johnson, who said it would peed the process, save money, and reduce the chance for error.

A recount can't start until Tuesday at the earliest, and Friday's court challenge filed by Attorney General Bill Schuette puts even that start date in doubt.

Trump failed to stop the recount.  However, he's not alone.  In an earlier Detroit Free Press story on the Board of Canvassers meeting, the other part of the story intruded.


But the Michigan Board of State Canvassers declared a one-hour recess just as the 9:30 a.m. meeting began, as news broke that Attorney General Bill Schuette had filed a lawsuit asking the Michigan Supreme Court to halt the recount before it began. Shortly before 10:30 a.m., the board voted to go into closed session to consider the Schuette legal action.

Follow over the jump for that part of the story.

The Republicans had a Plan B and they implemented it, as the Free Press reported Mich. AG Schuette moves to halt presidential recount simultaneously with its reporting on the Board of Canvassers meeting.


In a court action filed today, Schuette echoes arguments made for President-elect Donald Trump, arguing Green Party candidate Jill Stein, who received just over 1% of the vote in Michigan, is not an "aggrieved" candidate entitled to a recount, and there isn't time to complete a recount, even if Stein was entitled to one.

"If allowed to proceed, the statewide hand recount could cost Michigan taxpayers millions of dollars and would put Michigan voters at risk of being disenfranchised in the electoral college," Schuette said in asking the Michigan Supreme Court for immediate consideration of his petition barring a recount.
...
"Even though Stein could have petioned for the recount weeks ago, she waited until the last possible moment under state law to do so," Schuette told the court.

The Free Press quoted Jill Stein's attorney Mark Brewer's responses to the Republican objections.  Brewer had the following in response to Schuette.


Mark Brewer, a Southfield attorney representing the Stein campaign, denounced Schuette's action as "unprecedented interference by a partisan attorney general on a matter that should be handled routinely by the Board of Canvassers."

Brewer, a former long-time chairman of the Michigan Democratic Party, said "the motivation is purely partisan," as Schuette "is a Trump supporter and he has ambitions of running for governor." He said Schuette "is trying to please his Republican constituency."

My thoughts exactly.  He was just as vocal replying to Trump's objections.


Mark Brewer, a Southfield attorney representing Stein, said the Green Party candidate only has to "allege" she is aggrieved to qualify for a recount. She doesn't have to prove she is aggrieved, said Brewer, a former chairman of the Michigan Democratic Party.
...
"I would remind everybody that the original source of the claim that this election was rigged was Mr. Trump," and a manual recount could also dispel his allegations, Brewer said.


That's the good news.  This is the bad news.


A recount can't start until Tuesday at the earliest, and Friday's court challenge filed by Attorney General Bill Schuette puts even that start date in doubt.

That's aggravating.  If one of the objections to the recount is how long it will take, then the Republicans' attempts to stop it are just making it worse.  I wouldn't be surprised if that's a feature, not a bug.

Michigan’s attorney general has asked the state Supreme Court to block a potential recount of the state’s presidential vote.

Yes, the Trump campaign has filed suit in a different court from Schuette.  Welcome to Plan C.
Posted by Pinku-Sensei at 1:21 PM