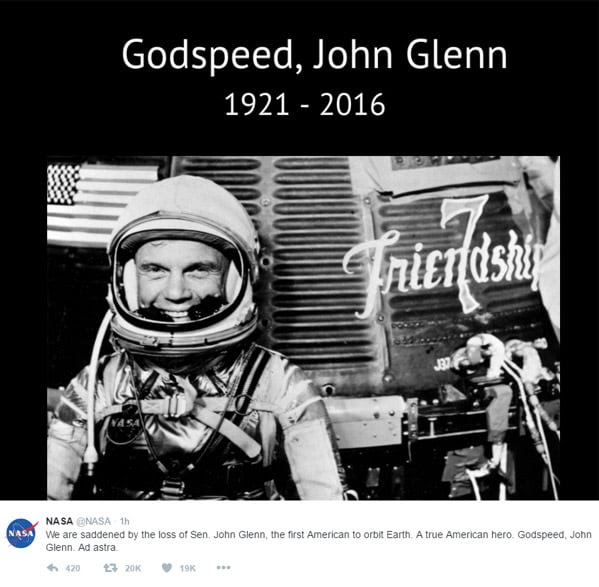 In the comments to Party's over as judge orders Michigan recount halted, I changed my mind about the subject of today's entry.


[T]omorrow's post looks like it won't be any of the ones I suggested. Instead, it will be a video tribute to John Glenn. While I post a lot about politics and entertainment lately, this was originally a science, technology, and environment blog and one of the recurring topics has been space exploration and the fear that it might go away. Senator Glenn's death fits right into those themes.

John Glenn, the first American astronaut to orbit the earth and a legendary figure in the American space flight program, has died, the Ohio governor has said. He was 95. Glenn was one of America's first and most celebrated astronauts and had a long public career that included two space flights, 24 years as a U.S. Senator from Ohio, and a run for the presidency. He was born July 18, 1921. Glenn will go down in history as the first American to orbit the earth, one of the original seven Mercury astronauts. On Feb. 20, 1962, he climbed into his Friendship 7 capsule, lifted off from Cape Canaveral in Florida, circled the earth three times in five hours -- and became a national hero.

His time as a Mercury astronaut became part of a movie, "The Right Stuff."  Here is the fictionalized version of his first mission from the movie, which has an appropriate title for today: The Right Stuff. Godspeed Ed Harris - I mean, John Glenn.


One last time, Godspeed, Senator Glenn.  Say hello to fellow Ohioan Neil Armstrong once you get to your destination.
Posted by Pinku-Sensei at 12:15 AM