Wild boars may prevent people from returning to towns near Fukushima

I know I hinted twice that I would celebrate Purim on this blog, I've decided to skip it this year because today marks the sixth anniversary of the Fukushima triple disaster.  That is an occasion much more on topic for the blog's themes, so today I observe an anniversary of DOOM instead of joy.*

After six years, conditions have managed to improve near the ruin nuclear plant, enough that people might return.  Gizmodo has the story.


In just a few weeks, the residents of a Fukushima city will finally be allowed to return to their homes. Trouble is, the place has been overrun by hundreds of belligerent and potentially radioactive wild boars, prompting public safety concerns.

At the end of March, the six-year-long evacuation order will be lifted for Namie, a city located just 2.5 miles (4 km) from the damaged nuclear power plant. Radiation levels, now measured at 0.07 microsieverts an hour, are the same as they are in other areas of Japan. Namie is the closest area to the nuclear meltdown residents have been allowed to return to since the disaster on March 11, 2011, but the continued presence of wild boars in the region is making prospective homecomers nervous.


High radiation levels drove people away from many areas of Fukushima.

I shouldn't have been surprised.  As the video noted, Chernobyl became an impromptu wildlife refuge, complete with radioactive wolves, so the evacuation zone around Fukushima becoming one as well should have been expected.

Finally, the idea of Fukushima being infested with radioactive boars evoked the image of the giant boar demon from the opening scene of "Princess Mononoke."  I wasn't the only one to think that, as Gizmodo used the following illustration for their article. 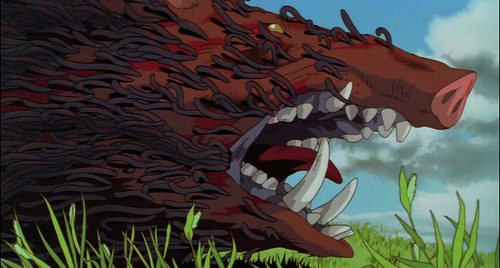 *No, I won't observe it tomorrow, as that is the beginning of Daylight Saving Time.  I'll save it for next year, when it falls on the evening of February 28th -- perfect timing!
Posted by Pinku-Sensei at 2:00 PM