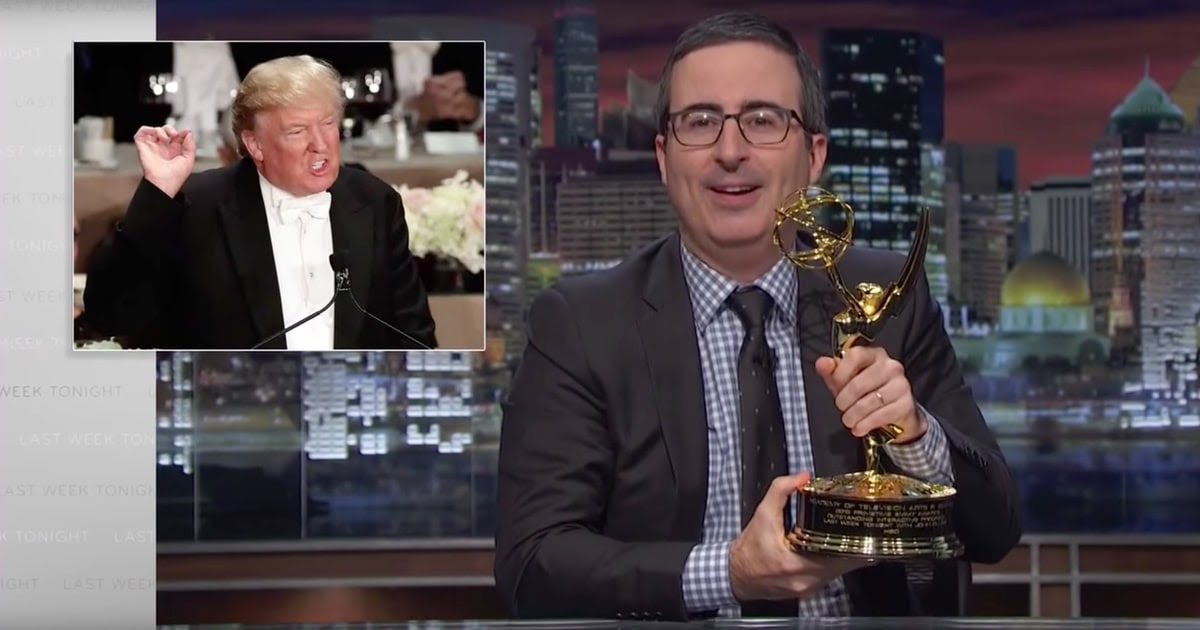 At the end of WXYZ on Marche du Nain Rouge 2017, I teased my readers by telling them to "Stay tuned for an entertainment-themed retrospective featuring the top entry of last year."  The hint was the backside of John Oliver blowing up 2016.  Sure enough, the top two posts of last year both featured John Oliver.

The most read entry of the two was Last Week Tonight examines Clinton and Trump foundations after winning three Emmy Awards from September 27, 2016.  It earned 7947 page views according to the default counter, 8226 according to the raw counter, by the end of March 20, 2017.  Not only was it the top post of last year, it's currently the top post of all time on the blog.  Here's the story from the notes for October 2016, when it was the top post for the month as well as the winner of the Revenge of the Back Catalog Trophy.*

The entry earned 2672 page views in the first two hours after being shared at the Coffee Party USA Facebook page, 1942 in the first hour.  It helped attract nearly 1995 page views to the blog the first hour and 792 the second.  In the first two hours, it rocketed up to 6th place, knocking Clinton wins the news media while Sanders wins the Internet out of the all-time top ten and passing PBS Newshour examines gerrymandering in Maryland and North Carolina, which had only occupied sixth place for a few hours.  Overnight, it powered up the rankings until it was in third by 9 AM the next day.  It ended up in first place after 24 hours with 7406 views during the first 24 hours.  It also helped contribute to the best single day in the blog's history with 7930 page views.  It ended October with 7947 page views after reaching a maximum of 7997, 8176 according to the raw counter, at 7:59 PM on October 26, 2016.  The tendency of the default counter to shrink page views over time strikes again!

The second most read entry of the year and third of all time also featured John Oliver, John Oliver on feelings over facts and Colbert on Trumpiness.  It ended the blogging year with 5059 page views, 6206 according to the raw counter.  I'll be a good environmentalist and recycle the relevant paragraph from Best August so far and other monthly meta to explain how it got its page views.

"John Oliver on feelings over facts and Colbert on Trumpiness" from July 25, 2016 won both the top post and Revenge of the Back Catalog trophies with 6061 entries during the month.  The entry also rose to second on the all-time top ten list with 6099 page views, 6139 according to the raw counter, by the end of July.  As I documented in Popular entries from the back catalog for the fifth year of Crazy Eddie's Motie News, it knocked Eye spy the gas price rollercoaster about to coast down like a parachute out of the all-time top ten.  Like the previous two entries, it earned its page view[s] by being shared at the Coffee Party Facebook page, where it earned more than 5700 page views in 24 hours.  Before being shared, it had 117 page views.  Sharing it helped draw 5861 page views to the blog the day it was posted, 1325 in the first hour.

The list of retrospectives about top posts at the end of this entry shows that I've never featured two most read entries for the year in the same post and only once have I included posts on the same theme as the top post, and that was the "other" top post for the year.  Congratulations to John Oliver for achieving a first on this blog!

I'm not done with the subject.  Follow over the jump for more posts built around John Oliver that made last year's Top 40.** 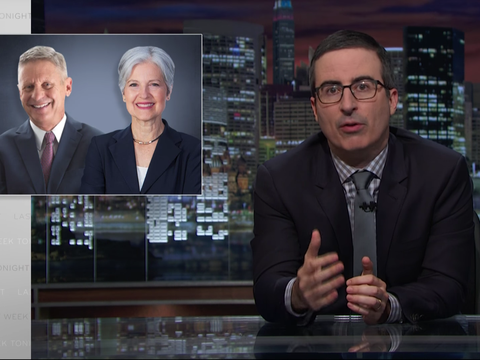 John Oliver and Keith Olbermann examine minor party candidates from October 26, 2016 came in fifteenth for the year with 2538 page views according to the raw counter.  That's all I'm going to say about it right now; I'm saving its full story for an upcoming retrospective about minor party candidates, which should be the post after next in this series.

The nineteenth most read entry of the blogging year just ended was John Oliver and FiveThirtyEight on Tax Day, which ended the year with 2097 page views according to the raw counter.  Again, I'm going to be a good environmentalist and recycle the relevant passage from Monthly meta for April 2016 to explain its rise.

The top post for April 2016 was "John Oliver and FiveThirtyEight on Tax Day," posted Apr[il] 18, 2016.  I shared it both at Kunstler's blog and the Coffee Party Facebook page.  Between the two, it earned 2027 page views, 2043 according to the raw counter, and helped attract 2409 page views the night of the 18th and into the next day. It also tied for most commented on entry for April with four comments and ended the month at tenth on the all time most read list.

The entry earned a total of 2044 page views according to the default counter before being knocked out of the all-time top ten by PBS Newshour examines gerrymandering in Maryland and North Carolina at 10:00 A.M. on October 2, 2016.  It earned its spot in the top ten by passing Slow drip of Flint Water Crisis erodes Rick Snyder's approval, a story I first recounted in Popular entries from the back catalog for the fifth year of Crazy Eddie's Motie News.  Sic transit gloria mundi!

With two posts on the top ten and four in the top 20, I can say that John Oliver blew up 2016 on this blog, just as he did on his show.

Next in this series, a retrospective on the Michigan recount, then minor party candidates. Stay tuned.

Previous entries in this series.
Entries about top posts from previous years.
*Readers of mine may have noticed that I didn't post monthly retrospectives from September onwards.  That's because of what I wrote in the statistics post for the sixth year of this blog.

The stats look even better if I consider just the most recent five complete months, October 2016 through February 2017.  That period averaged 38,776.2 page views per month.

I got in the habit of posting retrospectives as a way of boosting page views.  When I exceeded my page view goals before I could post my retrospectives, first as links on social media and then compiled as posts, I lost my motivation, although I still kept notes.  I'm going to have to resume the practice, although it looks like I'll be quoting the annual retrospectives in the monthly ones for a while instead of the other way around.

**Normally I only feature posts in the top twenty for my annual retrospectives, but this year I've decided to look back at the year's Top 40.  Why?  First, there has been such an increase in page views leading to an incredible churn of the all-time top ten that the twenty-ninth most read entry of the past year landed on the top ten list in early April.  A top twenty wouldn't capture that, but a top thirty would.  Second, the twentieth most read entry of the year before last, There's a Santorum cocktail, too, ended the that blogging year with 462 page views.  The year before that, the twentieth most read entry earned 320 page views.  This year, the twentieth most read entry ended the year with 2080!  That jump in the cutoff prompted me to look at all posts that earned at least about half that, or 1000 page views, resulting in 38 posts.  Who ever heard of a top 38?  So I've expanded it to a top 40, with the two entries rounding out the list at 996 and 995 page views each according to the raw counter.  May it be worth my while to write the resulting themed retrospectives and my readers' while to read them.